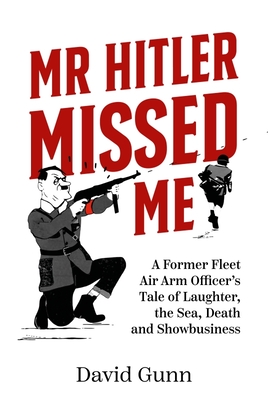 
Email or call for price.
In 1941 aged six David Gunn was subjected to Hitler's Blitz of Plymouth. Unlike some 1,200 who were killed, he and his mother escaped to live on a farm in the peaceful Cotswold hills where he learned to milk cows and ride horses. David joined the Royal Navy, the fourth generation of his family to do so, at the age of 13.

At the Royal Naval College, Dartmouth there was a cold bath on waking up and compulsory boxing - then to an even more disciplined training cruiser in the tropics and Arctic Circle.

Now a midshipman he traveled on the HMT Empire Windrush to the Indian Ocean to join a cruiser which sailed for the Maldives to oversee the transformation from sultanate to republic.

Returning home there were rough seas in the Cold War, rugby with the Wasps and modern pentathlon to Olympic standard. Training as a Fleet Air Arm fighter pilot was followed by operational flying in the Mediterranean. Spies appeared more than once. Vera Lynn, Clement Freud, Rupert Murdoch and Barbara Cartland all entered his life. A Lieutenant Commander on a Friday night, David became a television presenter the following Monday. This is his story...