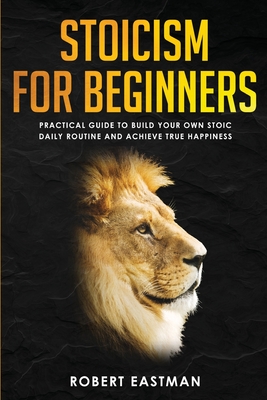 By Robert Eastman
$19.95
Not in stock. At Our Partner Warehouse: Usually Ships in 4-7 Days.

Are you having a bad day? Or even worse than that?

Maybe the promotion didn't come out as expected. Perhaps your girlfriend or husband has just dumped you, moved out and took the cat too? Or maybe your dad, who loved you more than anything, has just passed away -heart attack - out of the blue

Maybe your dog ate the homework again, the class is in five minutes, and that's your lame excuse, but you're stuck with it-tough situation.

Maybe it's that there's no particular reason at all. You're just down, once again. Life isn't serving what you want. Nobody does what you want them to do. And what's the point anyways?

Of course, you might be a relatively well adjusted human being. Someone who is adventurous and ready for the next challenge to take life to the next level. If so, stoicism has the answers for everyone.

Stoicism is an ancient philosophy that's enjoying a wide resurgence of interest in recent years, a philosophy that emphasizes practical application to actual human lives. Stoicism not only helps explain why the world is in the way it is, but it also clearly shows how one might live in that world, how to make some excellent lemonade from all those lemons that life has given to you.

Stoicism For Beginners takes you through basic ideas of Stoic life, shows you specific and concrete steps that you can take to build an unshakeable edifice for your life, a life lived at its deepest and most meaningful levels. Bad days have reached their end.

Best of all, Stoic principles are entirely consistent with the teachings of virtually all worldwide faiths. Stoics are Christian, Muslim, Hindu, Jewish, atheist, and agnostic. There's even a giant convention, Stoicon, that has rapidly grown into an event that attracts tens of thousands of Stoic practitioners from all over the world. Something is happening. Those ancient Greeks and Romans were really onto something.

The basic Stoic ideas are, in fact, spiritual concepts that all the world's prominent faiths build upon. Stoicism assembles these ideas into a coherent program that brings its practitioners to a deeper understanding of themselves and that unruly world in which they live in.

It's a philosophy that doesn't come to some abstract conclusions and just leaves it there. What knowledge is good if I can't put it into practice? Imagine having a guest, giving him or her an empty cup, pointing to some lemons and having him to make something out of it? Well, stoic practice gives you a cup full of delicious lemonade that will transform your life.