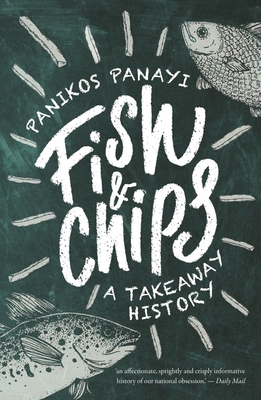 
Not in stock. At Our Partner Warehouse: Usually Ships in 4-7 Days
Deep-fried in facts and cultural insight, a mouth-watering history of this briny staple—complete with salt and vinegar, mushy peas, and tartar sauce.

Double-decker buses, bowler hats, and cricket may be synonymous with British culture, but when it comes to their cuisine, nothing comes to mind faster than fish and chips. Sprinkled with salt and vinegar and often accompanied by mushy peas, fish and chips were the original British fast food. In this innovative book, Panikos Panayi unwraps the history of Britain’s most popular takeout, relating a story that brings up complicated issues of class, identity, and development.

Investigating the origins of eating fish and potatoes in Britain, Panayi describes the birth of the meal itself, telling how fried fish was first introduced and sold by immigrant Jews before it spread to the British working classes in the early nineteenth century. He then moves on to the technological and economic advances that led to its mass consumption and explores the height of fish and chips’ popularity in the first half of the twentieth century and how it has remained a favorite today, despite the arrival of new contenders for the title of Britain’s national dish. Revealing its wider ethnic affiliations within the country, he examines how migrant communities such as Italians came to dominate the fish and chip trade in the twentieth century.

Brimming with facts, anecdotes, and images of historical and modern examples of this batter-dipped meal, Fish and Chips will appeal to all foodies who love this quintessentially British dish.

“[A] scholarly account of the rise and enduring popularity of what Panayi presents as something of a cultural marvel.”
— Times Literary Supplement

“Fish and Chips is a book brimming with fascinating facts and anecdotes about a dish that can be found on menus compiled by both Michelin Star chefs and your local chippy down the road.”
— Oxford Times

“This is the best history yet written of a British institution, alive to the cosmopolitan origins of food through global migration . . . a rewarding read for anyone interested in the history of Britain; so good in fact that it made me venture out on a windy night to buy a fish supper at my traditional local chippie.”
— History Today

“What a clever, accessible, enjoyable, and informative book! While providing an abundance of revealing anecdotes, it also goes beyond food to tackle relevant topics such as migration, identity, technology, entrepreneurship, and more . . . a wonderful book.”
— Gastronomica

“The book provides an abundance of facts, anecdotes and black-and-white images of historical and modern fish-and-chip memorabilia to intrigue readers. Fish and Chips will appeal to those who enjoy British history, culinary historians, and all those who love this quintessentially British dish.”
— Digestible Bits and Bites