On the Himalayan Trail: Recipes and Stories from Kashmir to Ladakh (Hardcover) 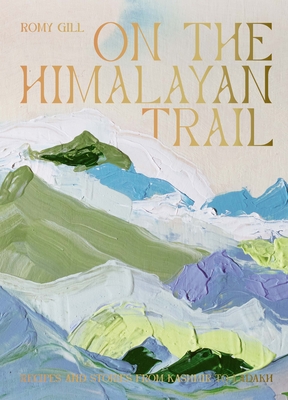 On the Himalayan Trail: Recipes and Stories from Kashmir to Ladakh (Hardcover)


Click Title to See Location Inventory
"The heart and soul of beautiful Kashmir is in every single recipe. Simply stunning." – Gordon Ramsay

In On The Himalayan Trail Indian food writer and chef, Romy Gill, tells the story of Kashmir and Ladakh's unique and tantalizing cuisine sharing over 80 extraordinary recipes that can be recreated in your own home kitchen.

With everything from Shammi Kebabs (minced lamb patties) to Wagen Pakora (deep fried aubergine in gram flour) for Nashta (starters) succulent meat curries like the Kashmiri Rogan Josh or Gustaba (lamb meatballs cooked in a yoghurt gravy); to aromatic vegetable dishes such as the Kanguch yakhni (morels cooked in spicy gravy): these recipes shines a light on the magnificent, little-known cuisine of Kashmir and Leh, celebrating its land, its ingredients and its heritage.

Kashmiri cuisine is one of the most delectable cuisines in India. Heavily influenced by Mughal, Persian, Afghan and Central Asian styles of cooking, it offers up a diverse range of dishes, displaying and reveling in a fusion of flavors and influences. Increasingly difficult to access due to the political uncertainty in the region, it's more important than ever to share and preserve Kashmir's secrets and traditional methods of cooking.
Romy Gill is a British/Indian chef, food writer, author and broadcaster and a regular on Ready, Steady, Cook (she's just been confirmed for the next series) and R4's Food Programme. In 2016 she was appointed an MBE in the Queen's 90th birthday honours list. Author of ZAIKA: Vegan recipes from India
"Merging a travelogue with a cookbook, Gill...brings the backstory of each dish to life by spotlighting snippets of conversation and portraits of the people she met along the way." -Saveur

"International travel took a backseat for many of us the past two years, but for anyone with a case of wanderlust, On the Himalayan Trail is a welcome escape." -Eater

"Romy’s recipes shine a light on this magnificent, little-known cuisine, celebrating its land, its ingredients and its heritage." -Paula Forbes, Stained Page News