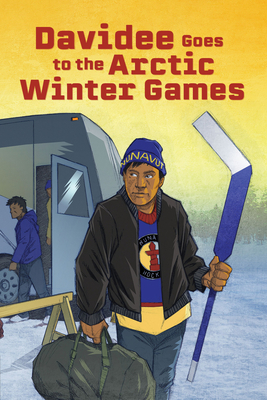 Davidee has always loved hockey. Lately, though, all he wants to do is play video games. He dreams of playing in the NHL, but how does a kid from Naujaat make the big league?

When Davidee tries out for the Arctic Winter Games and unexpectedly makes the team, he can't believe his luck. But Davidee is only the backup goalie, and Team Nunavut can't seem to find their footing. Can Davidee find a way to get the team playing together before the gold medal game?

Dr. Ryan Lahti grew up in the small town of Little Britain, Ontario and has worked in K-12 and post-secondary education for over a decade. In Nunavut, Ryan has taught in Naujaat and Iqaluit as a classroom teacher and worked as an instructor for the Nunavut Arctic College, teaching students from most Nunavut communities. Ryan has four degrees and most recently earned is his Doctor of Education from Western University in London, Ontario. Ryan has experience coaching and supervising students at various competitions across Canada and internationally. Ryan currently lives in Toronto and works as a consultant for the University of Toronto, and he is looking forward to travelling back to Nunavut soon.