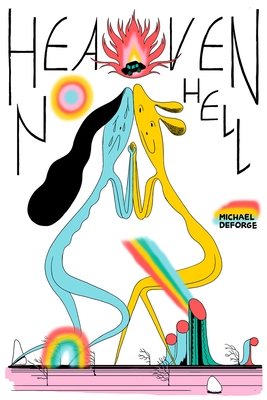 This book is like a kaleidoscopic fever dream. It doesn't make much logical sense at all - but it exudes tantalizing mystique.

— From Heaven No Hell by Michael Deforge

"One of the most inventive and prolific cartoonists working today."—Vulture

In the past ten years, Michael DeForge has released eleven books. While his style and approach have evolved, he has never wavered from taut character studies and incisive social commentary with a focus on humor. He has deeply probed subjects like identity, gentrification, fame, and sexual desire.

In “No Hell,” an angel’s tour of the five tiers of heaven reveals her obsession with a haunting infidelity. In “Raising,” a couple uses an app to see what their unborn child would look like. Of course, what begins as a simple face-melding experiment becomes a nightmare of too-much-information where the young couple is forced to confront their terrible choices. “Recommended for You” is an anxious retelling of our narrator’s favorite TV show—a Purge-like societal collapse drama—as a reflection of our desire for meaning in pop culture. Each of these stories shows the inner turmoil of an ordinary person coming to grips with a world vastly different than their initial perception of it. The humor is searing and the emotional weight lingers long after the story ends.

Heaven No Hell collects DeForge’s best work yet. His ability to dig into a subject and break it down with beautiful drawings and sharp writing makes him one of the finest short story writers of the past decade, in comics or beyond. Heaven No Hell is always funny, sometimes sad, and continuously innovative in its deconstruction of society.

Michael DeForge is a cartoonist, illustrator, and community organizer in Toronto, Ontario.

“One of the comic-book industry's most exciting, unpredictable talents.”—NPR

"With Heaven No Hell, Michael DeForge relishes exposing his prowess as an intelligent designer."—Pop Matters Best Books of 2021

"DeForge’s comics feel several steps ahead of everyone else’s thinking. I’m really only ever comparing him to his own work. Few cartoonists feel as liberated..."—The Comics Journal