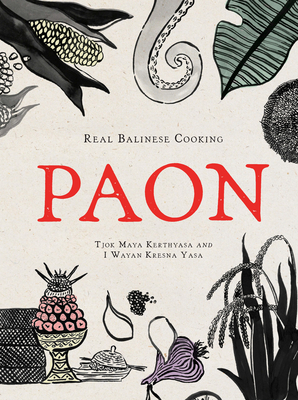 
On Our Shelves Now
Direct from the traditional home kitchens of Bali, Paon is a cookbook of true Balinese food and recipes.

Sharing more than 80 dishes alongside essays and beautiful photography capturing the life, culture and food from across this widely beloved island, Balinese locals Tjok Maya Kerthyasa and I Wayan Kresna Yasa shine a light on the depth and diversity of Balinese cuisine, with insight into food and worship, sacred fare, and zero-waste cooking.

Journey through rice fields, food forests, coastal towns and bustling markets in six chapters: Foundations; From the Fields; From the Land; From the Sea; From the Pasar; and Rare and Ceremonial.

With dishes ranging from elaborate ceremonial cuisine such as Bebek Betutu (Ubud-style smoked duck) to dishes that rely only on the simplest ingredients enjoyed at their unadorned best, such as Be Panggang (grilled spiced snapper), Paon reveals a largely untold story of the island: everyday Bali, modern Bali, agricultural Bali. This is an essential cookbook for lovers of Indonesian food and culture.
I Wayan Kresna Yasa is a Balinese chef born on the island of Nusa Penida, on Bali's east coast. He trained and worked in the US for six years, cooking at the likes of Acadia in Chicago and New York's Blue Hill Stone Barns. In Bali, he is known for the deftness of his cooking, his deep respect for the environment, and his drive to put the flavors of his home on the global culinary map. He helped launch Room4Dessert with chef-owner Will Goldfarb, before transitioning to hospitality company Potato Head. Wayan is now global executive chef and culinary director for the Potato Head family. He opened Ijen – the group's first zero-waste sustainable seafood restaurant – and Kaum which is known for its revival of rare tribal recipes from across the archipelago. And his most recent venture is plant-based Indonesian restaurant Tanaman, which was listed as one of the best new restaurants in the world in Condé Nast Traveller's June 2020 issue.

Tjok Maya Kerthyasa is an Indonesian-Australian writer living in Ubud, Bali. She spent just under a decade in Sydney where she wrote for Australian Gourmet Traveller magazine, before moving home to Bali to reconnect with her family and her birthplace. Since returning, Maya has hosted culinary-based events, starred in an Indonesian food-based web series called Masakan Rumah, and has spoken about Balinese cooking for various media platforms. She works for Indonesian lifestyle and hospitality group Potato Head and is creating culinary tours for visiting chefs with Room4Dessert's Will Goldfarb. Maya is documenting her grandmother's recipes to share with the next generation of Balinese cooks and food lovers from other parts of the world. Her mission is to see the cuisine better understood and celebrated on a global level.

"In Carey’s lovely new book, “Lanka Food,” she explains and demystifies the cooking she learned from her Sri Lankan mother’s side of her family." -Joe Yonan, The Washington Post