All in Divine Order: Nothing Happens by Accident! (Paperback) 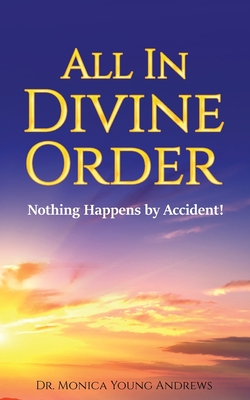 Have you ever had something happen to you (good or bad) and realized later that it tied into something else that was truly amazing in your life so much so that it made you stop and say "WOW" Have you ever read or heard the scripture in the bible from Romans 8:28? Well I have, and especially after the "bad" things, found myself saying many times...Now that's divine order

All In Divine Order: Nothing Happens By Accident shares experiences such as my parents divorcing when I was 8 years old, growing up with a sister with sickle cell anemia and water on the brain, a father diagnosed and dying of cancer 9 years after told he had 6 months to live, car accidents that I should not have walked away from, getting married after 4 months, having 5 hip replacements even though we only have 2 hips and much more I further share how God has worked even in the worse scenarios growing my faith beyond most.

It is my hope and prayer that after reading this, you look at your life experiences in a way that grow your faith and move you into your purpose where you find yourself saying, "WOW That's All In Divine Order: Nothing Happens By Accident "

Chaplain Dr. Monica Young Andrews, founder of the Divine Order movement and Spirnancial Partners in Shine, grew up the oldest of three in the District of Columbia. She attended private school and is a proud Hampton University alumnus. Although her background is Computer Science, she's been in the financial arena for decades and has always been a practicing advocate of the "application of knowledge". At age 15, receiving her first paycheck, she quickly learned about "Uncle Sam", but didn't understand why he was taking so much out of her check since she really didn't even have an uncle named Sam

Since 2010 she has fervently worked to equip thousands with the knowledge, tools and resources to create everlasting wealth for true legacy building. Dr. Andrews determined a long time ago if she can ask 10 people a question where 8-10 give the same response, then she does not necessarily need to retain that information. What she needs to know is what those 8-10 don't know, thus has spent decades learning and practicing what the average don't.