Burn Boston Burn: 'The Story of the Largest Arson Case in the History of the Country' (Hardcover) 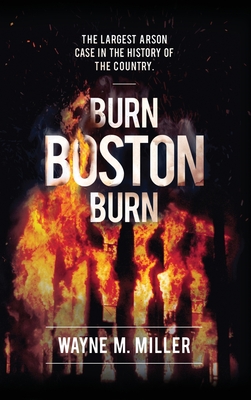 Burn Boston Burn: 'The Story of the Largest Arson Case in the History of the Country' (Hardcover)

Burn Boston Burn-The Largest Arson Case in the History of the Country is an astounding true crime narration. A conspiracy of 9 men, including 3 Boston cops and a Boston firefighter, burned Boston and surrounding communities in the early 1980s due to tax-cutting measures that caused layoffs of hundreds of police and firefighters. Over 2 years, these fire buffs turned arsonists, torched 264 buildings, causing millions of dollars in damages and hundreds of injuries. The city was ablaze with nightly fires, sirens wailing through the streets and people too afraid to sleep. This book interweaves the activities of the arsonists with those of the investigators, the firefighters and the citizens of the area. Readers will shake their heads in disbelief at the brazen and wanton actions of these political terrorists.

The author, now retired ATF Special Agent Wayne Miller, lived this case for three years. A TV cameraman helped break the case when one of the cops waved his gun in the air at a massive fire as if he were at a rodeo. The case included a stolen police car dumped in Boston Harbor, a threat letter consisting of cut-out letters and plans to murder witnesses.

After the Boston Police Officer/arsonist became a witness, ATF utilized 17 undercover contacts to perfect a Federal case. Agent Miller spent innumerable hours with those perpetrators who became Government witnesses. An arsonist's journal provided the basis for chilling insights into their words, actions, and thoughts. Mr. Miller now has regular contact with that arsonist who has provided additional information in support of the book.

Every firefighter who has heard of the story wants to read about it. Also, anyone interested in true crime, investigative procedures, the inner workings of a criminal conspiracy and fires would have strong interests in this book. The case was covered by national media in the early to mid-1980s.