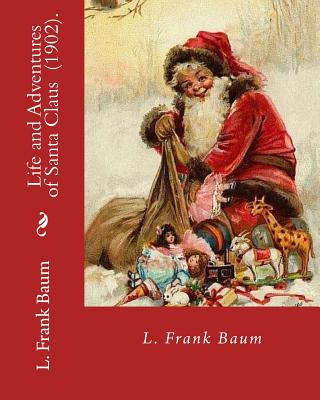 PLOT: Santa Claus, as a baby, is found in the Forest of Burzee by Ak, the Master Woodsman of the World (a supreme immortal), and placed in the care of the lioness Shiegra; but thereupon adopted by the Wood Nymph, Necile. Upon reaching young adulthood, Claus is introduced by Ak to human society, wherein he sees war, brutality, poverty, child neglect, and child abuse. Because he cannot reside in Burzee as an adult, he settles in the nearby Laughing Valley of Hohaho, where the immortals regularly assist him, and Necile gives him a little cat named Blinky.......... Lyman Frank Baum (May 15, 1856 - May 6, 1919), better known as L. Frank Baum, was an American author chiefly famous for his children's books, particularly The Wonderful Wizard of Oz and its sequels. He wrote a total of 14 novels in the Oz series, plus 41 other novels, 83 short stories, over 200 poems, and at least 42 scripts. He made numerous attempts to bring his works to the stage and the nascent medium of film; the 1939 adaptation of the first Oz book would become a landmark of 20th century cinema. His works anticipated such century-later commonplaces as television, augmented reality, laptop computers (The Master Key), wireless telephones (Tik-Tok of Oz), women in high-risk and action-heavy occupations (Mary Louise in the Country), police corruption and false evidence (Phoebe Daring), and the ubiquity of advertising on clothing (Aunt Jane's Nieces at Work). Childhood and early life: Baum was born in Chittenango, New York in 1856 into a devout Methodist family. He had German, Scots-Irish, and English ancestry, and was the seventh of nine children of Cynthia Ann (n e Stanton) and Benjamin Ward Baum, only five of whom survived into adulthood."Lyman" was the name of his father's brother, but he always disliked it and preferred his middle name "Frank". His father succeeded in many businesses, including barrel-making, oil drilling in Pennsylvania, and real estate. Baum grew up on his parents' expansive estate called Rose Lawn, which he fondly recalled as a sort of paradise. Rose Lawn was located in Mattydale, New York. Frank was a sickly, dreamy child, tutored at home with his siblings. From the age of 12, he spent two miserable years at Peekskill Military Academy but, after being severely disciplined for daydreaming, he had a possibly psychogenic heart attack and was allowed to return home. Baum started writing early in life, possibly prompted by his father buying him a cheap printing press. He had always been close to his younger brother Henry (Harry) Clay Baum, who helped in the production of The Rose Lawn Home Journal. The brothers published several issues of the journal, including advertisements from local businesses, which they would give to family and friends for free. By the age of 17, Baum established a second amateur journal called The Stamp Collector, printed an 11-page pamphlet called Baum's Complete Stamp Dealers' Directory, and started a stamp dealership with friends. At 20, Baum took on the national craze of breeding fancy poultry. He specialized in raising the Hamburg. In March 1880, he established a monthly trade journal, The Poultry Record, and in 1886, when Baum was 30 years old, his first book was published: The Book of the Hamburgs: A Brief Treatise upon the Mating, Rearing, and Management of the Different Varieties of Hamburgs. Baum had a flair for being the spotlight of fun in the household, including during times of financial difficulties. His selling of fireworks made the Fourth of July memorable. His skyrockets, Roman candles, and fireworks filled the sky, while many people around the neighborhood would gather in front of the house to watch the displays. Christmas was even more festive. Baum dressed as Santa Claus for the family. His father would place the Christmas tree behind a curtain in the front parlor so that Baum could talk to everyone while he decorated the tree without people managing to see him...