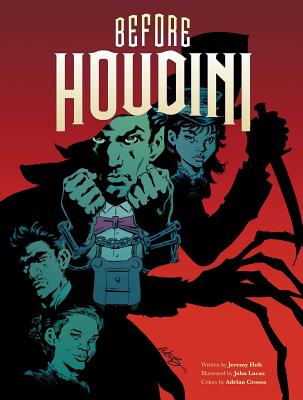 By Jeremy Holt, John Lucas (Illustrator)
$16.99
On Our Shelves Now

The exciting second volume of the After Houdini saga explores the origins of the elusive master of magic, the man who would become…Houdini.

London, 1888. A shadowy killer stalks the streets of London, his appetite for blood unleashed upon the city’s lower classes. To defeat him, MI6 turns to its most top-secret team: four teenage agents with extraordinary gifts—including a young American immigrant with a talent for illusion . . .

After Houdini began the story of Josef Houdini, son of the famous Harry Houdini—brillian illusionist, acclaimed escape artist, and top-secret covert operative. Now we turn back the clock and meet Ehrich Weiss, a young man whose skill at picking locks is about to land him the adventure of his dreams, and pull him into a war that will affect his life—and his son’s—for years to come. This is the story of Ehrich’s strange beginnings, from before he was a world-famous magician. Before he was a master of espionage. Before he was...Houdini.

Jeremy Holt is a Vermont-based author whose most recent works include After Houdini, Skip to the End, Skinned (Insight Comics), Southern Dog (Action Lab), and Pulp (comiXology), which IGN has called, "...one of the best one-shot comics of the year." When he's not writing, this Mac Genius is fixing computers, and getting confused for his identical triplet brothers. Follow him on Twitter @Jeremy_Holt.

"Before Houdini is a well thought-out read with smart pacing and a clear narrative arc. It’s a fun Victorian murder mystery, complete with supernatural warfare. Ehrich is a compelling character, and his diverse team of co-agents Raj, Elenora, and Atsuko are well-designed. The writing flows very well from panel to panel, and it’s the kind of dialogue where you can *hear* the voices..."
— Rogues Portal