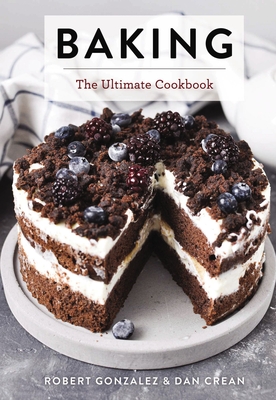 
On Our Shelves Now
With over 300 recipes, Baking: The Ultimate Cookbook provides you with everything you need to know to master the craft of baking!

Baking is a rewarding craft. It is also a demanding one that requires precision and flawless technique. Baking: The Ultimate Cookbook provides everything you need to become a master, featuring over 300 recipes tested and authored by professional pastry chefs, insightful breakdowns of essential techniques and key ingredients, and stunning original photography. Whether you’re trying to perfect a sourdough starter or just eager to soothe a craving for something sweet, Baking: The Ultimate Cookbook ensures you’re always positioned to succeed.
Chef Robert Gonzalez first entered the culinary world as an intern at Tuyo while studying at the Miami Culinary Institute. There he soon achieved the position of Head Pastry Chef, developing his imaginative dessert skills and receiving local recognition for his achievements. Gonzalez made his Boston debut at the esteemed Bistro du Midi, bringing his unique talent to bread and dessert offerings while working alongside Executive Chef Robert Sisca. He was recognized as an Eater Young Guns Semi-Finalist for his magnificent creations, and also received rave reviews from Boston’s food scene critics. Gonzalez then joined the inaugural team at Cultivar, running the pastry department. The highly anticipated opening of Cultivar at the Ames Hotel featured an in-house bread program and selection of rotating, produce-driven desserts to complement New England seasonal foods. Gonzalez currently helms the culinary team at the Concord Market as the Culinary Manager, where he focuses on bringing customers the absolute best confections, breads, and foods with locally sourced ingredients. Inspired to create desserts that are as unique and visually stunning as they are delicious, Gonzalez’s confections are designed to capture the heart and imagination of every guest.

Immersed in food and driven to create delicious confections, Chef Dan Crean’s devotion for integrating classic desserts and breads into the modern era are the key to his success. Cooking in kitchens all over Boston for over 10 years, Crean found his passion in the pastry arts world. His drive began as a Bakery Manager at the illustrious Black Bird Donuts, Production Manager at Union Square Donuts, and pastry work at Alden & Harlow and Waypoint. Crean took his large step as the Pastry Sous Chef
at the highly anticipated Cultivar in the Ames Hotel, contributing to an in-house bread program and a top-of-the-line selection of poetic desserts that helped Cultivar earn the distinction of Boston’s Best New Restaurant 2018. Today, Crean is the Assistant Culinary Manager at the Concord Market, leading the bakery department team, which focuses on scratch-made confections and an artisan bread program.