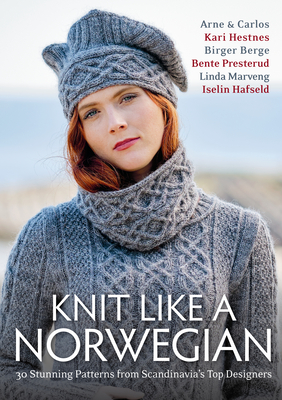 Six of Norway's most popular knit designers have come together to create this stunning collection, now available in English for the first time From the warmth and charm of Arne & Carlos to classic, elegant cable patterns from Linda Marveng; from the lush, vivid colors of Bente Presterud to the irresistible contemporary look of Birger Berge--this book has it all. A must-have for any knitter who's been searching for the best of the best in modern Norwegian crafting design

Arne Nerjordet and Carlos Zachrison―Norwegian and Swedish, respectively―established Arne & Carlos, a clothing design company, in 2002. Drawing on their traditional Scandinavian influences and their natural environment, they create original and visually striking knitwear. They are the authors of the international best-selling books 55 Christmas Balls to Knit; Easter Knits; Knitted Dolls: and Knit-and-Crochet Garden, 30 Slippers to Knit & Felt, Make Your Own Ideabook, Norwegian Knits with a Twist, Arne & Carlos' Field Guide to Knitted Birds and Arne & Carlos' Favorite Designs also available from Trafalgar Square Books. Their creative base is in the Valdres region of Norway, north of Oslo.Birger Berge is educated as a historian and works at The Holberg Prize, UiB. He is passionate about traditional craftsmanship and spends much of his time developing knitting patterns that show the rich tradition we have. He resides in Bergen, Norway. Trafalgar Square Books also publish Nordic Knits with Berge Birger.Since 2008 Bente Presterud has run her company Bente Presterud Design, which is located in Nannestad, north of Akershus. She designs knitting and crochet patterns and is also a needlework consultant. Works as a craft and needlework journalist, but on a freelance basis.Linda Marveng loves designing feminine knitwear, especially with cables and texture. She has worked for Rowan Yarns as a Design Consultant in London and published his first Norwegian knit book in 2012. Linda designs for both Norwegian and international magazines, reviews knitting publications, translates patterns, and teaches courses. She resides in Oslo, Norway.Designer Iselin Hafseld graduated from SHKS in Oslo. She is best known as the founder of the TINDE clothing brand, collections of exclusive knitwear with a relaxed elegance.