Stacked Against the Odds: Life with Autism and How a Unique Sport Changed My Life (Paperback) 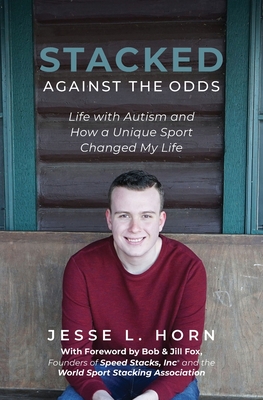 Stacked Against the Odds: Life with Autism and How a Unique Sport Changed My Life (Paperback)

"Stacked Against the Odds is a story of one family's triumph and victory as they navigate the challenging waters of raising a child with autism. Written in his own words, this inspiring account of Jesse Horn is encouraging and uplifting as Jesse walks us through his darkest times and greatest victories Jesse and his family's true character are revealed for us as we take a ride with them through their story, giving us all hope and inspiration "
-Don Teel
President, World Sport Stacking Association

"If you're looking for inspiration on overcoming tough odds, look no further than Jesse Horn's first book Stacked Against the Odds. Jesse's story is an honest and heartwarming account of growing up with autism and the challenges it presents for a family. His accomplishments as a stacker are overshadowed only by the grit and determination he demonstrates in overcoming circumstances that would be overwhelming for most of us. If you need a bright spot to walk towards, read this book."
-Larry Goers
CEO, World Sport Stacking Association

JESSE HORN came into the world a perfectly sweet baby boy, but when he was two years old, things started to change. He wouldn't make eye contact, he wouldn't speak, and his temperament became unpredictable. After seeking a diagnosis, the family's fears were confirmed: Jesse had autism. After two years of Applied Behavioral Analysis Therapy, life started changing once again. At the age of nine, a chance encounter with a unique sport would help Jesse discover a passion that would skyrocket his personal growth and allow him to embrace a newfound sense of self-confidence.

His story will lead families facing autism to hope: hope that those with autism are so much more than a diagnosis. They are capable of discovering life-fullfiing passions and defining for themselves what it is to live with autism. Jesse has gone on to earn international titles in Sport Stacking with Team USA, is a motivational speaker and ambassador, and has guest-starred on CBS's The Doctors.