The Transformation of a Trillion Dollar Industry: How Demographics, Technology, and Unbridled Immigration will Change the U.S. Economy forever Beginni (Paperback) 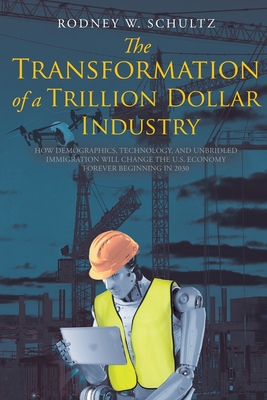 The Transformation of a Trillion Dollar Industry: How Demographics, Technology, and Unbridled Immigration will Change the U.S. Economy forever Beginni (Paperback)

Starting in the decade of 2030, actual demographic milestones of the U.S. population will mark the most transformative period in our country's history, thanks in large part to: a) Baby Boomers aging into their twilight years; b) advancements in technology; and c) an ever-increasing illegal immigrant population requiring, and in some instances demanding, that social services (including voting rights) be afforded them even though they have never provided any contribution to the public coffers since entering the country; and by most accounts, beyond the decade of 2030, the U.S. population is projected to grow at a much slower pace, age considerably, and eventually become more racially diverse and ethnically tolerant. In fact, by the year 2035, despite a slowing population growth, the U.S. population is expected to see older adults actually outnumber children for the first time ever, while an international population continues to grow at a very moderate pace.

The Transformation of a Trillion Dollar Industry is a fascinating journey through the eyes of a $1.2 trillion industry that recognizes lessons learned from the past, impacts being felt today, and future disruptions that many see coming sooner rather than later. It's also a macro- and micro-economic journey that most futurist and forward thinkers will tell you is not going to be a pleasant one starting around the year 2030, but one that most everyone living today in the U.S., as well as communities and cultures around the world, will be taking in one form or another whether they like it or not as they go about their day.

Viewed as a microcosm of the entire U.S. economy, the $1.2 trillion construction industry is not immune from the myriad of social, cultural, political, and technological changes being forecasted on the horizon as demographic shifts impact how individuals will live and work. It is also one of very few sectors of the U.S. economy that is most representative of the country's social diversity, and whose labor force represents the cross-section of a multi-cultural fabric; and like most sectors of the

U.S. economy starting around the year 2030, construction is an industry that will start to see dramatic shifts in how it goes about meeting the future demand of its customers. Shifts that will require a massive overhaul in how the industry simultaneously grapples to manage, market, and deliver its goods and services through ever-advancing technologies.