Power to the People!: A Young People's Guide to Fighting for Our Rights as Citizens and Consumers (For Young People Series) (Paperback) 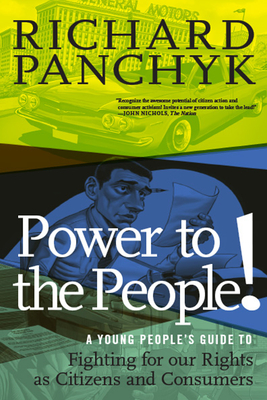 Power to the People!: A Young People's Guide to Fighting for Our Rights as Citizens and Consumers (For Young People Series) (Paperback)


Not in stock. At Our Partner Warehouse: Usually Ships in 4-7 Days
An important and empowering history of and guide to the battle for our right to safe products and conditions--for younger readers.

Corporations enter our daily lives from the moment we wake up until we turn off the lights at night. Large Internet companies, health insurance companies, fuel and transportation companies--all play a role in our lives every moment of every single day. And yet what power do we have over their actions or intentions? None, except through redress in a court of law for any harm they may have done. This area of the law is known as torts, from the French word for wrongs.

Power to the People! offers a deep understanding of how civil actions work, through many examples and straightforward language for the middle-grade student reader. From Ralph Nader's 1966 law-changing address to Congress on automobile safety (it's thanks to Nader that we wear seat belts) to the decades-long battle to raise awareness of the risks of smoking (cigarette and cigar smoke contains over 7,000 chemicals, and has caused the deaths of more than 2.5 million nonsmokers in the last half-century), readers will learn how we must fight to protect ourselves from corporations that are more concerned with profit than our safety. Corporate America will listen, Panchyk argues, but only if we make ourselves heard. Power to the People! explores all the ways we the people can be powerful, too.
Richard Panchyk's books include World War II for Kids, with a foreword by Senator John McCain, named a Notable Book by the National Council for the Social Studies, which has sold over 90,000 copies; Archaeology for Kids; Our Supreme Court, with a foreword by Senator John Kerry; Galileo for Kids, with foreword by Buzz Aldrin; and Boston History for Kids, foreword by Michael Dukakis. Panchyk is also a noted translator, including of three books by the Austrian writer Joseph Roth, who was a distant relative of Panchyk's. The author lives in the New York City area.
"One person can make a difference. In this unique view on citizenship, Panchyk introduces readers to Ralph Nader, who sparked a consumer movement. . . . . Young activists and budding lawyers are the ideal audience for this progressive call to action."--Booklist

"Tort Law and citizen activism are two key pillars that protect us from dangerous or unsafe products, corporate overreach, and reckless or careless behavior.  This important book should be read by everyone – young and old – who wants to learn how the law works, and how it can be used to protect us.  It’s entertaining, informative, and very interesting.  You’ll be glad you read it."
—Richard L. Newman, J.D., Executive Director, American Museum of Tort Law

“It is never too early to recognize the awesome potential of citizen action and consumer activism—on the streets, at the ballot box and in the courts. This book recognizes that truth and invites a new generation to take the lead!”
—John Nichols, The Nation

"Did you know that cars didn't always have seatbelts? Ever wondered who is at fault if you slip and fall on a wet supermarket floor?  Ever tried to figure out why kids’ toys have so many warning labels on them? These are all important questions, because the answers are deeply connected to our rights as citizens and consumers. And the answers also teach us about the power of the corporations which, for example, manufacture the cars, run the supermarkets, and make the toys for children. Power to the People! lays out, in lively language, with vivid examples, how the balance between corporate power and consumer power has been central to the development of our rights to live healthy, safe lives, and how we, as consumers, must continue to protect ourselves.”
—Victoria Ortiz, author of Dissenter on the Bench: Ruth Bader Ginsburg’s Life & Work