The Kaepernick Effect: Taking a Knee, Changing the World (Paperback) 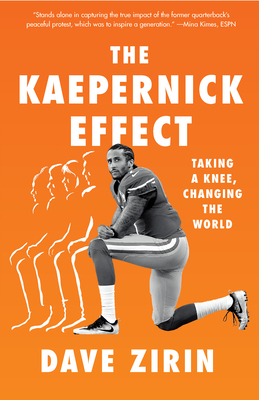 The Kaepernick Effect: Taking a Knee, Changing the World (Paperback)

Riveting and inspiring first-person stories of how "taking a knee" triggered a political awakening among athletes of all ages and levels, from the celebrated sportswriter

"With profiles of courage that leap of the page, Zirin uncovers a whole national movement of citizen-athletes fighting for racial justice."
--Ibram X. Kendi, National Book Award-winning author of Stamped from the Beginning

Hailed by Publishers Weekly in a starred review as "an enthralling look at the impact of peaceful protest by sports figures at the high school, college, and professional levels," The Kaepernick Effect explores the story of how quarterback Colin Kaepernick's simple act of "taking a knee" spread like wildfire throughout American society, becoming the preeminent public symbol of resistance to America's persistent racial inequality.

In this powerful book, critically acclaimed sports journalist and author Dave Zirin chronicles "the Kaepernick effect" for the first time, through "a riveting collection of first-person stories" (The Nation) from high school athletes and coaches, college stars and high-powered athletic directors, and professional athletes across many different sports--from Megan Rapinoe to Michael Bennett. In each case, he uncovers the fascinating explanations and motivations behind what became a mass political movement in sports.

"Necessary reading for all, especially those who want to make a difference in promoting social justice, equity, and inclusion, and end police brutality" (Library Journal, starred review), The Kaepernick Effect is for anyone seeking to get involved in the new movement for racial justice in America: "Take a knee, everyone, and start a revolution" (Kirkus Reviews).

One of UTNE Reader's "50 Visionaries Who Are Changing Our World," Dave Zirin is a columnist for The Nation, SLAM Magazine, and The Progressive. His many books include A People's History of Sports in the United States, Game Over, and Bad Sports (all published by The New Press). Host of Sirius XM's popular weekly show Edge of Sports Radio and a regular guest on MSNBC, CNN, and ESPN, he lives near Washington, DC.