Before We Sleep (Hardcover) 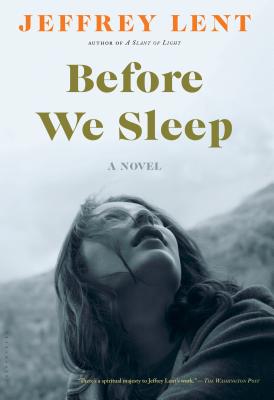 The sweeping, intergenerational story of a Vermont family, from WWII to the dawning of the '60s--the most magisterial and moving novel of acclaimed author Jeffrey Lent's career.

Katey Snow, seventeen, slips the pickup into neutral and rolls silently out of the driveway of her Vermont home, her parents, Oliver and Ruth, still asleep. She isn't so much running away as on a journey of discovery. She carries with her a packet of letters addressed to her mother from an old army buddy of her father's. She has only recently been told that Oliver, who she adores more than anyone, isn't her biological father. She hopes the letter's sender will have answers to her many questions.

Before We Sleep moves gracefully between Katey's perspective on the road and her mother, Ruth's. Through Ruth's recollections, we learn of her courtship with Oliver, their marriage on the eve of war, and his return as a changed man. Oliver had always been a bit dreamy, but became more remote, finding solace most of all in repairing fiddles. There were adjustments, accommodations, sacrifices--but the family went on to find its own rhythms, satisfactions, and happiness. Now Katey's journey may rearrange the Snows' story.

Set in a lovingly realized Vermont setting, tracking the changes that come with the turning of the seasons--and decades--and signaling the dawning of a new freedom as Katey moves out into a world in flux, Before We Sleep is a novel about family, about family secrets, and about the love that holds families together. It is also about the Greatest Generation as it moves into the very different era of the 1960s, and about the trauma of war that so profoundly weighed on both generations. It is Jeffrey Lent's most accomplished novel.

Jeffrey Lent was born in Vermont and grew up there and in western New York State. He studied literature and psychology at Franconia College in New Hampshire and SUNY Purchase. His first novel, In the Fall, was a national bestseller. His other novels are Lost Nation, A Peculiar Grace, After You've Gone, and A Slant of Light, which was a finalist for the New England Book Award and a Washington Post Best Book of 2015. Lent lives with his wife and two daughters in central Vermont.

"As always in Lent's work, personal and social conflicts are intertwined . . . Lent's nuanced portraits of the Snows and their world amply engage our attention--and often our delight, as when his gorgeous prose conjures the pleasures of Ruth's cooking or Oliver's fiddle music . . . Lent's compassionate depiction of the Snows' silence-haunted marriage is often painful to read, demonstrating vividly that love cannot heal all wounds. Yet it is also deeply affecting, as we see Ruth accepting the changed nature of the man she still loves and understanding that his quiet gifts will have to suffice as demonstrations of his love . . . [Before We Sleep] expresses the same generous spirit that informs all of [Lent's novels]." - Washington Post

"Lent, a quietly bold writer who rarely takes the expected path, makes this novel as much about mothers and daughters as about men and war . . . As usual, Lent brings his fictional world alive in brilliant physical detail: thickly textured descriptions of the fiddle-playing that consoles Oliver, of Ruth's cooking, and of the varied landscapes through which Katey drives . . . The interplay between their stories makes for a heartbreaking examination of the fraught bonds of kinship and community. Beautifully written and powerfully compassionate: more fine work from a modern master." - Kirkus Reviews

"Lent draws a parallel across time, connecting the vastly different yet similar lives of a mother and daughter each struggling to find her way through the secrets that have defined her--often not through their own doing. Lent’s fine prose depicts the touching physical and emotional journeys of the Snow family against a backdrop of the magical New England landscape." - Publishers Weekly

"Elegiac. . . Luxurious and deliberate. . . . For admirers of Emma Cline's The Girls, here is a less sensational but worthy companion." - Library Journal

"Lent (A Slant of Light, 2015) returns to familiar territory here: complicated familial relationships and the effects of war. In third-person, stream-of-consciousness prose, he combines exacting descriptions of the everyday with a realism that alternates between illuminating and mundane. . . . The Vermont setting is well realized . . . Lent’s characterization rings true." - Booklist

"This classic 'journey tale' hits all the right notes . . . Elegant prose, both spare and vivid . . . Lent has seamlessly woven together an intimate family drama against a shifting social backdrop . . . [His] rich narrative shifts gently back and forth between a world in flux, as seen through his young heroine's fresh eyes, and a world steeped in her parents' shared heartaches and damaged souls . . . In the end, Lent's characters remind us that whether we travel far and wide or only grapple in our heads with the facts of our lives, we need to find our own truths." - Washington Independent Review of Books

"Filled with lush prose, this intergenerational story follows a Vermont family from World War II to the dawning of the '60s . . . Lent delves into details and textures in this exquisite evocation of the New England landscape, enabling us to taste foods, hear the music, and see the sky in its many forms." - BookBrowse

"At times the rhythm of Lent's sentences reminded me of Cormac McCarthy's: long and almost fatalistic, though without the arcane vocabulary and breathtaking violence . . . The experience of reading Before We Sleep is one of immersion in multiple connected worlds. Lent brings readers directly into the postwar world of iceboxes and new Frigidaires and the late 1960s world of impoverished Southern black tenant-farmer families . . . And, always, there is the land: Katey's awed first glimpse of the ocean from Maine's rocky coast, the lay of the fields and woods on the drive between two Vermont towns." - Seven Days

"Unfailingly entertaining, profound, and elegantly crafted and written, BEFORE WE SLEEP is Lent's most majestic novel to date, one of the finest books ever to come out of rural America" - Howard Frank Mosher, author of A STRANGER IN THE KINGDOM

"In an era where many writers spend as much time on self-promotion as on their craft, Jeffrey Lent has quietly created some of the finest novels of our new century. This beautifully written novel depicts familial and generational conflicts without accusation or condescension, becoming a profound depiction of mid-twentieth-century America." - Ron Rash, author of the New York Times bestseller, SERENA

"In Before We Sleep, Jeffrey Lent has written a beautifully crafted family saga, his rolling sentences detailed and precise, his characterizations full and memorable. Sentence by sentence rural New England comes alive, and his language draws you in like a clear stream in summer." - Tim Gautreaux author of SIGNALS: New and Selected Stories

"There’s a spiritual majesty to Jeffrey Lent’s work . . . He expertly spins out a half-dozen narrative strands that weave into a richly textured tapestry . . . Some of the most magnificent prose being written today." - Washington Post on A SLANT OF LIGHT

"Engrossing . . . Lush, beautiful prose, complex characters and an eye for detail make this novel a pleasure." - New York Times Book Review on A SLANT OF LIGHT

"Breathtaking . . . Lent’s newest epic unfolds with the assured timelessness of a classic . . . Many sentences demand rereading for their sheer beauty, and each love story -- some tragic, others newly born -- has a poignant emotional charge. Lent offers eloquent insight into what makes his characters tick, yet enough unknowns remain to keep the novel unpredictable through the final pages." - Booklist on A SLANT OF LIGHT

"[Lent’s] prose is as magnificent as ever . . . More fine work from a writer who stirs both the head and the heart with powerful grace." - starred review, Kirkus Reviews on A SLANT OF LIGHT