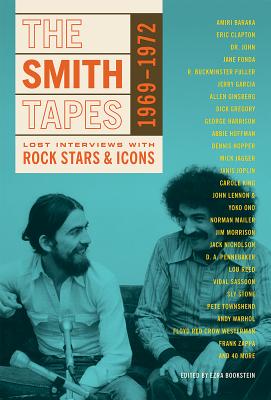 
Email or call for price.
The 1960s were a period of radical cultural, social, and political upheaval in the United States and around the globe; yet in just three years, between 1969 and 1972, Village Voice "Scenes" columnist, WPLJ FM radio host, and cult figure Howard Smith got to the heart of it all by talking it out—both on and—off the record. As famous as those who passed through the airwaves, Smith encapsulated the end of an era through personal conversations and hard-hitting interviews with Mick Jagger, Frank Zappa, Andy Warhol, Buckminster Fuller, leaders of the feminist movement and the Gay Liberation Front, a NARC agent, John Lennon and Yoko Ono, and scores of other iconic and influential personalities, including musicians, artists, filmmakers, actors, writers, politicians, and social activists, from countercultural luminaries to everyday revolutionaries and everyone in between.

The Smith Tapes transcribes, for the first time ever, sixty-one of those recorded sessions, from an archive of more than one hundred fifty reels unearthed after more than forty years. Edited by documentary film writer and director/producer Ezra Bookstein, this book reveals the time capsule that Smith ingeniously captured, and contains raw and unscripted talks that take you right into the midst of a transformative cultural and musical explosion.
Ezra Bookstein is a documentary film writer, director, and producer. He curated the Grammy-nominated, limited-edition Smith Tapes box set as well as the podcast series with Howard Smith's son, architect Cass Calder Smith (built original Chronicle building)
"Whether it's John Lennon wrestling with the future of the Beatles, Norman Mailer explaining why he wants to enter politics or James Taylor pondering oncoming fame, Howard Smith's interviews are vivid, candid snapshots of major cultural and political figures during a tumultuous era in our country. Each conversation in The Smith Tapes is a micro-history of our times." -David Browne, author, Fire and Rain: The Beatles, Simon Garfunkel, James Taylor, CSNY and the Lost Story of 1970

"It's rare that an interviewer helps to shape his era as much as his best-known subjects, but that is the case with Howard Smith. Smith reported from inside the counterculture, which built trust with his subjects, but his intelligence, curiosity and tenacity take these conversations to places to places no one could have predicted -- even Smith himself. These interviews -- with writers, rock stars, filmmakers, politicians -- have lost none of their immediacy. Decades later, they remain gripping, essential reading." -- Anthony DeCurtis, Contributing Editor, Rolling Stone

"The Smith Tapes overflows with important thoughts and ideas, genuine wisdom, contradictions, and the absurd, which is what we always inherit from the past. We could read it and think, Well, that was then and this is now. That would only perpetuate the problem, however. So maybe today is the day we really start thinking about what we heard yesterday and how it might just help us save tomorrow." - LitHub

"As a columnist at The Village Voice and a radio host, Howard Smith, who died in 2014 at 77, chronicled and helped to shape the counterculture. The Smith Tapes collects his interviews with Jerry Garcia, Andy Warhol and dozens of other stars from 1969 to 1972. They're full of candid admissions. But the collection is perhaps most notable for how it captures in amber the blissed-out, peace-seeking tone of those years." - New York Times

"A priceless chronicle of last century's most pivotal era. Between 1969 and '72, Village Voice mainstay Howard Smith's WPLJ radio show was a voice from the front line through intimate encounters with rock stars, movie new-bloods, cultural figureheads and political prime movers. The 61 interviews gathered here sat in Smith's loft for decades until excavated and restored by Ezra Bookstein, who does an immaculate job presenting highlights. Many interviewees were at crucial times in their career and sound unusually relaxed in their interviewer's company." -- Record Collector magazine