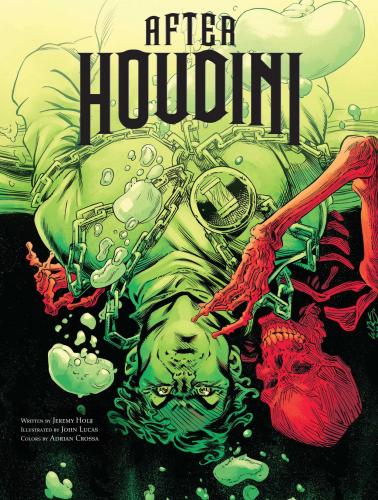 Harry Houdini, master magician and covert spy for the United States, has been kidnapped. The only man who can save him is his estranged son Josef, who, like his father, knows the power of magic—and how it can be more than just an illusion.

Josef Houdini takes after his father: A gifted escape artist, there’s not a jam he can’t get himself out of. Then again, when your father is one of the greatest illusionists of all time, that comes as no surprise. What does come as a surprise is the fact that Harry Houdini is not only the world’s greatest magician, but also a top-secret operative for the US government during World War I. In rare form he finds himself trapped—stuck on a mission he is unable to escape from. That’s why the government needs his son to fill his shoes and complete the mission—but does Josef have the wherewithal to do it? Or is the possibility of success just an illusion?

Packed with intrigue, suspense, and fantasy, After Houdini is a revisionist look at one of history’s most mysterious figures that is sure to take readers on a journey they’ll never forget.

Jeremy Holt is a Vermont-based author whose most recent works include After Houdini, Skip to the End, Skinned (Insight Comics), Southern Dog (Action Lab), and Pulp (comiXology), which IGN has called, "...one of the best one-shot comics of the year." When he's not writing, this Mac Genius is fixing computers, and getting confused for his identical triplet brothers. Follow him on Twitter @Jeremy_Holt.

"After Houdini is a thrilling and imaginative journey into the world of magic. Holt's love for the craft is clear: After Houdini is teeming with colorful characters and their illusions from the pages of magic history--a joy for any magic lover!"
— David Kwong: Magician and NYT Crossword Constructor

"After Houdini is a graphic novel that truly lives up to its promise...The steampunk vibe is natural and spot on."
— Comics Grinder