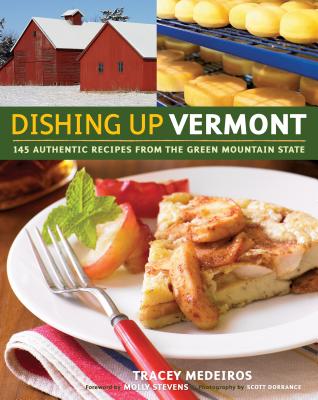 From world-renowned cheddar cheeses to the delectable dinners turned out by talented chefs, the Green Mountain State has its own unique and rich food traditions. Learn new ways to use maple syrup, recreate that meal you enjoyed at a fancy restaurant, bake tree-ripened local apples into delicious desserts, and find out how the farmers growing the tastiest microgreens like to eat them. Filled with inspiring profiles of local food producers, Dishing Up® Vermont will quickly have you hooked on the joys of Yankee cooking.

Tracey Medeiros is a food writer, food stylist, and recipe developer and tester. Her recipes have appeared in Bon Appetit, Cooking Light, Eating Well, and Hampton Roads magazines. When she relocated to Vermont several years ago, she immediately became interested in the exciting local food scene there, and her interest led to the development of Dishing Up® Vermont.

Dishing Up Vermont brings to life that food community across the state through appetizing dishes like mini frittatas with zucchini, goat cheese, and tomatoes from Does' Leap Farm in East Fairfield, grilled quail salad with maple vinaigrette from The Inn at Weathersfield in Perkinsville, and gingerbread cupcakes with orange-cream cheese frosting from Izabella's Eatery in Bennington.
As Medeiros says, "It puts a face on the farmers and chefs in Vermont who grow, market, prepare, and cook the state's freshest foods."  Not only is it great food, she adds, "but we care about how we grow it.
— Town & Country

The most cutting-edge book of the recent New England crop is Dishing Up Vermont by food writer Tracey Medeiros, which showcases the products and recipes of farms, orchards, restaurants and inns in that increasingly food-centric state.  The Vermont Fresh Network, which benefits from a portion of the book's proceeds, was the nation's first statewide farm-to-restaurant program.
Sometime this fall, you simply must put aside your normal brunch dish for the book's exquisitely decadent Vermont Croque Monsieur.  This version of the traditional French bistro sandwich, contributed by a chef from Cliff House at Stowe Mountain Resort, features cinnamon-raisin bread cooked in egg and slathered with a spread of mascarpone cheese blended with chives and a bit of maple syrup, then piled high with ham, turkey and Gouda and baked.
The book's flourishes are fun, but some of the best food in Dishing Up Vermont is simple.  With just eight basic ingredients, the Flip-Over Apple Cake is a good example.  Its slightly crunchy yet buttery underbelly serves as a fine foil for its tender, pretty apple topping. Though the book's recipe, contributed by owners of a 114-year-old Vermont orchard, calls for Northern Spy or Rhode Island Greening apples, I found that a combination of Ginger Gold and tasted just fine.

“Page through Dishing Up Vermont and you’ll get a vivid picture of this state’s colorful, vibrant cuisine.”

Vermont chefs have long appreciated the culinary benefits of local, seasonal fare. Dishing Up Vermont includes contributions from restaurants and farms around the Green Mountain State.