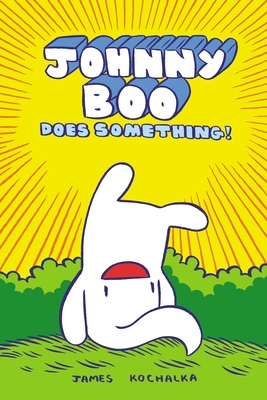 By James Kochalka
Email or call for price.
Hard to Find - Unlikely to be Available

This is book number 5 in the Johnny Boo series.

What does Johnny Boo do when there's nothing to do? Johnny Boo Does Something! In fact, he does a LOT of things! Watch Johnny Boo have a Boring Adventure and discover Yawn Power, write an angry letter to Ice Cream Magazine, get a squiggly new hairdo, fall to the bottom of Ice Cream Hole #25, and celebrate the maybe-birthday of his pet ghost Squiggle, all adding up to the most inventive Johnny Boo book yet!