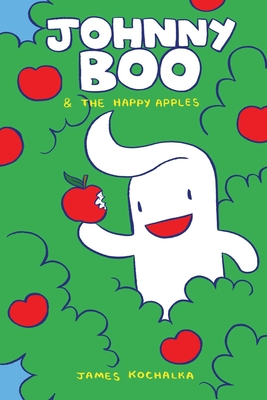 This is book number 3 in the Johnny Boo series.

The full-color, all-ages hit series returns! In this adventure, Johnny Boo has been eating a little too much ice cream, and now his muscles have gotten all floppy and droopy. Why, they're positively floopy! Meanwhile, our friend the Ice Cream Monster has changed his gluttonous ways and now has big strong muscles, thanks to his new favorite food: apples! Terribly embarrassed by his own puny muscles, Johnny Boo sets out on a quest to find some happy apples that can give him strong happy muscles. But it won't be easy... especially if the Ice Cream Monster mistakes him for a delicious ice cream cone! And is that a television inside the monster's belly!?