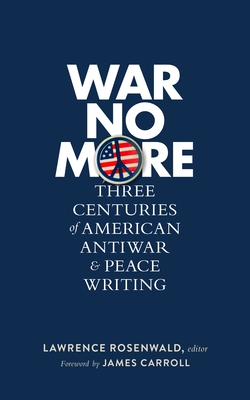 
Email or call for price.
A first-of-its-kind collection of the essential American antiwar writings, from the Revolution to the war on terror—featuring over 150 eloquent, provocative voices for peace

Library of America presents an unprecedented tribute to a great American literary tradition. War has been a reality of the American experience from the founding of the nation and in every generation there have been dedicated and passionate visionaries who have responded to this reality with vital calls for peace. Spanning from the American Revolution to the war on terror, War No More gathers the essential texts of this uniquely American antiwar tradition in one volume for the first time.

Classic expressions of conscience like Thoreau’s seminal “Civil Disobedience” lay the groundwork for such influential modern theorists of nonviolence as David Dellinger, Thomas Merton, and Barbara Deming. The long arc of the American antiwar movement is vividly traced in the urgent appeals of activists, made in soaring oratory and galvanizing song, and in dramatic dispatches from the front lines of antiwar protests. The voices of veterans, from the Civil War to the Iraq War, are prominently represented, as is the firsthand testimony of conscientious objectors. Contemporary writers—including Barbara Kingsolver, Jonathan Schell, Nicholson Baker, and Jane Hirshfield—demonstrate the ongoing richness of this literature in the years since September 11, 2001.

Featuring more than 150 eloquent and provocative writers in all, War No More is a bible for activists, a go-to resource for scholars and students, and an inspiring and fascinating story for every reader interested in the crosscurrents of war and peace in American history.

LIBRARY OF AMERICA is an independent nonprofit cultural organization founded in 1979 to preserve our nation’s literary heritage by publishing, and keeping permanently in print, America’s best and most significant writing. The Library of America series includes more than 300 volumes to date, authoritative editions that average 1,000 pages in length, feature cloth covers, sewn bindings, and ribbon markers, and are printed on premium acid-free paper that will last for centuries.
A widely recognized expert on the literature of nonviolence, Lawrence Rosenwald is Anne Pierce Rogers Professor of American Literature at Wellesley College.