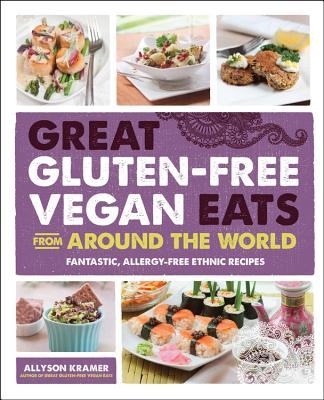 Great Gluten-Free Vegan Eats From Around the World is a cookbook for the home chef who likes to explore a world of cuisines, regardless of allergies or dietary restrictions. Step inside and travel the globe while still adhering to your plant-based, gluten-free diet with ethnic entrees you may have thought were off-limits, but are actually even better re-imagined! From European classics like Fig Pastries with Clotted Cream and English Cottage Pie to Caribbean specialties like Jamaican Jerk Tofu and Plantain and Potato Soup, you’ll dine on delicious dishes from all around the globe, while still pleasing every palate at your table.

Author Allyson Kramer, founder of the popular g-free vegan blog Manifest Vegan (http://www.manifestvegan.com), will walk you through each and every recipe—most of which include a photo—showing you exactly how to create gourmet meals that are impressive enough for even the most seasoned foodie. From tempting appetizers, to hearty mains, to luscious desserts, you’ll find more than 100 globally-inspired recipes that prove eating vegan and gluten-free doesn’t have to be a sacrifice, but rather an international delight!

Allyson Kramer is the founder of the blog Manifest Vegan (http://www.manifestvegan.com), which she launched in 2009 as a way to communicate her love of vegan cooking and recipe development to the world. Shortly after the site's launch, Allyson was diagnosed with Celiac disease, and she began focusing solely on gluten-free, vegan recipes. Manifest Vegan was listed as one of the top veg blogs of 2010 by VegNews Magazine, and has received praise on such sites as theKitchn.com, Slashfood.com, and Foodgawker. Allyson develops all of the recipes and photos that appear on the site. She is also a contributer to National Celiac Foundation Association newsletter and ChicVegan.com. She lives in Philadelphia, PA.