A Woman of Science: An Extraordinary Journey of Love, Discovery, and the Sex Life of Mushrooms (Paperback) 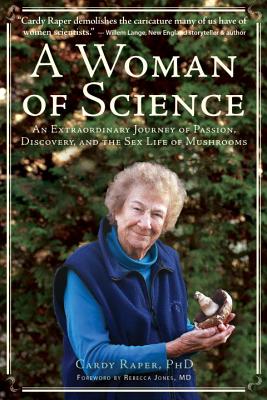 By Cardy Raper, Remeline M.D. Damasco (Foreword by)
Email or call for price.
Out of Print - Not Available

A STORY OF TRUE LOVE, DETERMINATION, SACRIFICE, AND DISCOVERY.

A Woman of Science catalogues a decades-long journey of inspirational hardship and success that serves as a model for what women can do in a field largely dominated by men.

Cardy Raper succeeded in becoming what she dreamed of as a young girl: a scientist. This beautifully written memoir details her struggles with the “boys’ club” mentality of the scientific and academic worlds, her grief over her husband’s premature passing, and above all her relentless, passionate efforts to unlock the secrets of mushroom gender and reproduction.

Cardy Raper is not a woman to accept “no” for an answer. When her mother told her that she could be a nurse when she grew up, Cardy informed her in no uncertain terms that she was going to be a true scientist, making grand discoveries. Science was a man’s world then. But despite lack of encouragement through college, Cardy learned what she needed. Then, at the University of Chicago, she met her mentor, John “Red” Raper, an equally stubborn and spirited scientist. They became soul mates, and, together, studied sexual reproduction in the amazing water mold Achlya. Cardy and Red married, had children, and continued to share their passion for science by unraveling the means of sexual reproduction in mushroom-bearing fungi.

They moved to Harvard University and continued their research. Years later, Red’s untimely death left Cardy alone in the competitive world of cutting-edge science. But Cardy carried on. She achieved her doctoral degree, learned the techniques of molecular genetics, and established her own laboratory. Ultimately, Cardy’s discoveries helped to uncover the way in which genes found throughout the animal kingdom—including humans—encode molecules for mating, sight, smell, and taste.

Dr. Cardy Raper received a Masters in Science degree from The University of Chicago and a PhD from Harvard University. She has been extensively published in national and international scientific journals and was named a University of Vermont Research Professor Emerita in Microbiology and Molecular Genetics. She was recently honored by being elected Fellow of the American Association for the Advancement of Science.

"What makes this memoir so readable and engrossing is Cardy’s frank account of her circumstances both in and out of the laboratory. Family photographs, and pictures and drawings of the organisms she worked with, add to the reader’s interest. This book encourages aspiring students—men as well as women—in how to overcome difficulties. Cardy Raper, a Harvard PhD, might well claim to have lived up to the slogan of the Harvard band, 'Illegitimum non carborundum: Don’t let the bastards grind you down!'" —Peter R. Day, PhD, Rutgers University Professor Emeritus and author of Plant-Fungal Pathogen Interaction

"Cardy Raper skillfully interweaves the scientific and the personal into a fast-moving and delightful read, offering candid and sage perspectives on a fascinating life." —Ursula Goodenough, PhD, Professor of Biology at Washington University and author of Sacred Depths of Nature

"Cardy Raper demolishes the caricature many of us have of women scientists: nerdy, bespectacled, polysyllabic, introverted spinsters devoted to their (usually abstruse) field of inquiry. She’s devoted, all right; not to just her science, but to life: From a childhood fascination with the natural world to a love affair with and marriage to a faculty mentor; from motherhood to widowhood; and finally from a voyage of discovery into what was at the time strictly a man’s world, to worldwide recognition as a leader of research in the fascinating world of fungi. Warmhearted yet vulnerable, often frustrated and saddened but never defeated, Cardy takes us with her as she enthusiastically probes the little-known world of fungi (where one species may have 20,000 genders), the often hostile atmosphere of male-dominated research, and the life of a working wife and mother." —Willem Lange, New England storyteller and author of Where Does the Wild Goose Go? and Intermittent Bliss