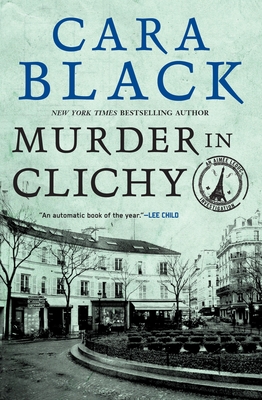 This is book number 5 in the An Aimée Leduc Investigation series.

A botched assignment leaves Parisian P.I. Aimée Leduc in possession of a cache of priceless Vietnamese jade. The jade’s history is steeped in colonial bloodshed—and someone is willing to spill even more blood to get it back

Private investigator Aimée Leduc has been introduced to the Cao Dai temple in Paris by her partner, René Friant. He urges her to learn to meditate: she could use a more healthful approach to life. The Vietnamese nun Linh has been helping Aimée to attain her goal, so when she asks Aimée for a favor—to go to the Clichy quartier to exchange an envelope for a package—René prompts Aimée to agree. But the intended recipient, Thadée Baret, is shot and dies in Aimée’s arms before the transaction can be completed, leaving Aimée with a wounded arm, a check for 50,000 francs, and a trove of ancient jade artifacts.

Whoever killed Baret wants the jade. The RG—the French secret service—a group of veterans of the war in Indochina and some wealthy ex-colonials and international corporations seeking oil rights are all implicated. And the nun, Linh, has disappeared.
Cara Black is the author of sixteen books in the New York Times bestselling Aimée Leduc series. She lives in San Francisco with her husband and visits Paris frequently.
Praise for Murder in Clichy

“Charming . . . Aimée is one of those blithe spirits who can walk you through the city’s historical streets and byways with their eyes closed.”
—Marilyn Stasio, The New York Times Book Review

“Leduc has a thorough grasp of the practicalities of investigation, plus a penchant for undercover work that will have readers on pins and needles.”
—San Francisco Chronicle

“Conveys vividly those layers of history that make the stones of Paris sing for so many of us.”
—Chicago Tribune

“Like having your own personal tour guide to quartiers of Paris you might otherwise be too timid to explore on your own, a very sophisticated guide in heels and retro Givenchy, who livens the tour with street-smart observations. Cara Black’s scene-setting details blend into the mystery as smoothly as crème de framboise into champagne—unnoticed at first amid the bubbles, but oh the kick!”
—Margaret Maron