Invisible Years: A Family's Collected Account of Separation and Survival During the Holocaust in the Netherlands (Hardcover) 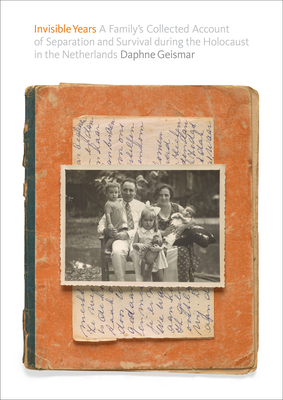 Invisible Years: A Family's Collected Account of Separation and Survival During the Holocaust in the Netherlands (Hardcover)

The Holocaust memoir of a Dutch family who evaded arrest and deportation by the Nazis. Told through letters, diaries, and interviews, and illustrated with photographs throughout, this detailed account brings a new perspective to one of history's most horrific chapters.

During the Second World War, as the Nazis tightened their grip on the Netherlands, the Jewish population was slowly restricted from public life--everything from owning a bike to having a job was forbidden. Sensing the murderous consequences of deportation, Daphne Geismar's family--her parents, grandparents, aunts, and uncles--decided to separate and go into hiding. Parents and children were torn apart, living for years in isolation behind a church organ, below floorboards, or even in plain sight. While timelines and notes provide context, we hear the voices of young Mirjam, sent by her parents to live with a family of strangers; Judith whose braids were cut to make her look less Jewish; Nathan, taken in and given false papers by a Dutch soldier. Ordinary people whose collective story is one of resilience and resistance, survival and compassion. "This is an important book because many people don't know what took place in the Netherlands during the Nazi occupation.... The] fascinating story also highlights the courage of the rescuers involved in that dangerous undertaking. It is a story that must be told to inspire others never to give up even when it seems all is lost."--Mordecai Paldiel, Former Director, Righteous Among Nations, Yad Vashem For readers of history and memoirs, this family's story, Invisible Years, challenges readers to follow this example of resistance to inhumanity.