Pennies in a Jar (Hardcover) 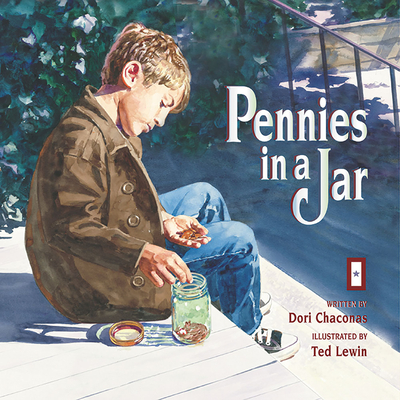 Pennies in a Jar (Hardcover)


Email or call for price.
"The day Dad went away to the war, I cried. He hugged me and told me to be brave. But I was afraid of so many things."

A young boy promises to be brave when his father goes off to fight in World War II, but it isn't always easy. Lots of things scare the boy, especially Josephine, the street horse who pulls the ragman's wagon, and Nell, the milkman's nag, with their big teeth and wild eyes. Even Billy and Bucky, the garbage wagon horses whose feet are so big and heavy, make him nervous.

Then one day, a stranger with a small pony named Freedom offers the boy an opportunity to give his father the perfect birthday present and find a new and special kind of courage.

Dori Chaconas has written a sensitive tale about a son's steadfast love for his soldier father that transcends distance, circumstance, and his own fears. Illustrator Ted Lewin's stunning paintings capture the simple spirit of the 1940s American home front.
Dori Chaconas developed her storytelling skills as the eldest of seven children and started writing children's books when she was the stay-at-home mother of twin girls. She has published stories in several children's magazines and sold embroidery designs to yarn companies. The author of a number of picture books, she lives in Wisconsin.

Ted Lewin grew up in Buffalo, New York, and received a BFA from Pratt Institute. During his long and illustrious career, he created more than two hundred books for children, including the Caldecott Honor Book Peppe the Lamplighter. In 2015, he and his wife, author-illustrator Betsy Lewin, were inducted into the Society of Illustrators Hall of Fame. He died in 2021.
"Chaconas conveys the language of the time ("lickety-split" and "humdinger," for instance), and, even better, the perspective of a boy without his dad to protect him. Lewin's sun-dappled, nostalgia-tinged watercolors lovingly depict the boy either in motion (in his eagerness to earn the pennies to buy Dad a birthday present) or at a safe distance from the big animals. A good way to ease into discussion of parents in the military today."—Booklist

"Lewin's photorealistic watercolors take advantage of the large double pages and capture the heartbreak and anxiety of a youngster whose father has gone off to war. This quiet story takes readers back to a time and place very different from today, but one that will resonate with contemporary children."—School Library Journal

"Parallels to current events, including parents with military duty and gasoline availability, make this story of a boy growing up during World War II extra-accessible. . . . Chaconas's narrative hits the right notes, and Lewin's shimmering watercolors are sun-splashed and copper-kissed, with studies in scale allowing the reader to get a real sense of the child's perspective."—Kirkus Reviews