Chernobyl: The History of a Nuclear Catastrophe (Paperback) 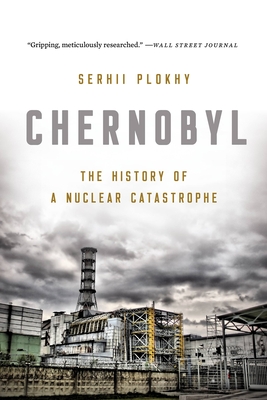 Chernobyl: The History of a Nuclear Catastrophe (Paperback)


Not in stock. At Our Partner Warehouse: Usually Ships in 4-7 Days
A Chernobyl survivor and the New York Times bestselling author of The Gates of Europe "mercilessly chronicles the absurdities of the Soviet system" in this "vividly empathetic" account of the worst nuclear accident in history (Wall Street Journal).

On the morning of April 26, 1986, Europe witnessed the worst nuclear disaster in history: the explosion of a reactor at the Chernobyl Nuclear Power Plant in Soviet Ukraine. Dozens died of radiation poisoning, fallout contaminated half the continent, and thousands fell ill.

In Chernobyl, Serhii Plokhy draws on new sources to tell the dramatic stories of the firefighters, scientists, and soldiers who heroically extinguished the nuclear inferno. He lays bare the flaws of the Soviet nuclear industry, tracing the disaster to the authoritarian character of the Communist party rule, the regime's control over scientific information, and its emphasis on economic development over all else.

Today, the risk of another Chernobyl looms in the mismanagement of nuclear power in the developing world. A moving and definitive account, Chernobyl is also an urgent call to action.
Serhii Plokhy is the Mykhailo Hrushevsky Professor of Ukrainian History and director of the Ukrainian Research Institute at Harvard University. The New York Times bestselling author of The Gates of Europe and Nuclear Folly, Plokhy is an award-winning author of numerous books. He lives in Burlington, Massachusetts.
"A masterful account of how the USSR's bureaucratic dysfunction, censorship, and impossible economic targets produced the disaster and hindered the response."—New York Review of Books

"Gripping, meticulously researched...[Mr. Plokhy] mercilessly chronicles the absurdities of the Soviet system and the arrogance of its apparatchiks. But the fact that he grew up fewer than 500 kilometers south of Chernobyl probably accounts for his vividly empathetic descriptions of the people on the ground -- the plant managers and employees, the firefighters, soldiers and others -- who risked their lives to contain the damage."—Wall Street Journal

"The bare outline of the Chernobyl fire and the Soviet silence have been well covered...Mr. Plokhy, who directs the Ukrainian Research Institute at Harvard, adds much detail to the...construction that caused the failure, and the false assignment of blame to operating engineers...[His] most telling disclosures deal with how the Soviet subterfuges played a major role in Ukraine's decision to become an independent nation once the Soviet Union disintegrated."—Washington Times

"A lucid account of how the Soviet mania for nuclear power combined with endemic shoddiness in the industrial sector and near-paranoid habits of state secrecy led to the 1986 disaster...The most comprehensive and convincing history of Chernobyl yet to appear in English."—Financial Times

"The first comprehensive history of the Chernobyl disaster...here at last is the monumental history the disaster deserves."—Julie McDowall, Times

"A work of deep scholarship and powerful stroytelling. Plokhy is the master of the telling detail."—Victory Sebestyen, Sunday Times

"Compelling...Plokhy's well-paced narrative plunges the reader into the sweaty, nervous tension of the Chernobyl control room on the fateful night when human frailty and design flaws combined to such devastating effect."—Guardian

"Plokhy's book...sustains a tone of thoughtful observation that is neither too detached nor heavily invested in a particular agenda... [He] delves deeper into the political fallout of Chernobyl, which played a significant role in the break-up of the Soviet Union."—New Statesman

"Haunting...Plokhy's...voice is humane and inflected with nostalgia. His Chernobyl and Prypiat emerge vividly -- as perhaps all disaster -- afflicted cities must-as shattered idylls."—Spectator

"Plokhy recounts the circumstances of the accident and its aftermath in painstaking detail...He tells the story with great assurance and style...A fierce and at times personal indictment of the ideology, bureaucracy and overconfidence of the Soviet system, as well as a strident condemnation of all modern states that continue to pursue military or economic objectives to the detriment of their populations and the environment."—Literary Review

"A history of the nuclear disaster that set precedents -- and standards -- for future mishaps of the kind...Plokhy...concludes that even in the wake of Chernobyl, we have not gotten much better at containing meltdowns...A thoughtful study of catastrophe, unintended consequences, and, likely, nuclear calamities to come."—Kirkus Reviews

"The most comprehensive exploration of the events that led to the Chernobyl disaster.... Engrossing."—Library Journal

"Plokhy...is a brilliant interpreter not only of the events themselves but of their long-term historical significance...As moving as it is painstakingly researched, this book is a tour de force and a cracking read."—Observer

"[Plokhy] casts his lyrical eye on a vast amount of detail, giving readers a sense of dramatic urgency that makes his account difficult to put down.... The further Chernobyl recedes in time, Plokhy writes, the more it fades into myth. His book, however, should help bring us back to reality."—Kristen Iversen, American Scholar

"Serhii Plokhy provides the definitive story of the Chernobyl crisis and its aftermath, skillfully covering all angles from the scientific story, the humanitarian and economic costs of the clean-up, the manner in which the explosion forced Gorbachev to jump-start his perestroika reforms, and the igniting of Ukrainian nationalism." —Andrew Wilson, Professor of Ukrainian Studies, UCL

"Serhii Plokhy has produced a highly readable account of the Chernobyl disaster and its political impact. It is destined to be the authoritative account for years to come."
—John Herbst, Director, Eurasia Center, Atlantic Council

"Serhii Plokhy is uniquely qualified to tell this tragic story: he writes not only as a major historian, but also as someone who was living with his family under the cloud of the Chernobyl disaster at the time. The result is as riveting as a novel."
—Mary Elise Sarotte, author of The Collapse: The Accidental Opening of the Berlin Wall

"Chernobyl lays out in devastating detail how the Soviets were vastly unprepared, in ways small and large, for what became the worst disaster in the history of nuclear energy...A riveting account...Is it possible that the world might someday forget the horrors that unfolded there three decades ago? Books like Plokhy's should help ensure that that doesn't happen."—Henry Fountain, Undark

"An insightful and important book, that often reads like a good thriller, and that exposes the danger of mixing powerful technology with irresponsible politics."
—Yuval Noah Harari, author of Sapiens and 21 Lessons for the 21st Century