So This Is Ever After (Hardcover) 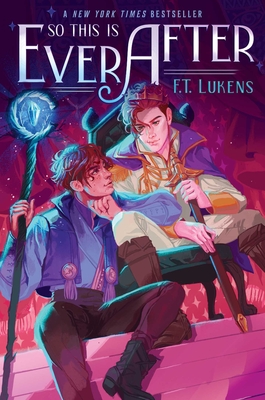 So This Is Ever After (Hardcover)


On Our Shelves Now
An instant New York Time bestseller!

Carry On meets Arthurian legend in this subversive, “delightfully original and whimsical” (Kirkus Reviews) young adult fantasy about what happens after the chosen one wins the kingdom and has to get married to keep it…and to stay alive.

Arek hadn’t thought much about what would happen after he completed the prophecy that said he was destined to save the Kingdom of Ere from its evil ruler. So now that he’s finally managed to (somewhat clumsily) behead the evil king (turns out magical swords yanked from bogs don’t come pre-sharpened), he and his rag-tag group of quest companions are at a bit of a loss for what to do next.

As a temporary safeguard, Arek’s best friend and mage, Matt, convinces him to assume the throne until the true heir can be rescued from her tower. Except that she’s dead. Now Arek is stuck as king, a role that comes with a magical catch: choose a spouse by your eighteenth birthday, or wither away into nothing.

With his eighteenth birthday only three months away, and only Matt in on the secret, Arek embarks on a desperate bid to find a spouse to save his life—starting with his quest companions. But his attempts at wooing his friends go painfully and hilariously wrong…until he discovers that love might have been in front of him all along.
F.T. Lukens is a New York Times bestselling author of YA speculative fiction including the novels So This Is Ever Afterand In Deeper Waters (2022 ALA Rainbow Booklist; Junior Library Guild Selection) as well as other science fiction and fantasy works. Their contemporary fantasy novel The Rules and Regulations for Mediating Myths & Magic was a 2017 Cybils Award finalist in YA Speculative Fiction and the Foreword INDIES Book of the Year Gold Winner for YA fiction and won the Bisexual Book Award for Speculative Fiction. F.T. resides in North Carolina with their spouse, three kids, three dogs, and three cats.
The characters have the same dynamic as a well-organized ­Dungeons & Dragons party and are well rounded and easy to root for."
— School Library Journal

"Reading like the love child of a late-night D&D session gone awry and a romantic drama, Lukens has crafted a delightfully original and whimsical narrative."
— Kirkus Reviews

"Lukens has created a magically expansive world where there's no homophobia and the only roadblock to romance is having the courage to delve into your own heart. An adventure that's both madcap and tender."
— Booklist