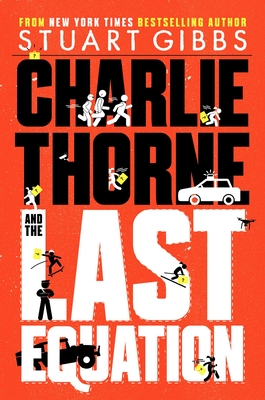 
On Order at the Warehouse: Not Guaranteed for the Holidays
“Fast-paced, smart, and action-packed...a real page-burner.” —Chris Grabenstein, #1 New York Times bestelling author of the Mr. Lemoncello’s Library series

From New York Times bestselling author Stuart Gibbs comes the first novel in a thrilling new series about the world’s youngest and smartest genius who’s forced to use her unbelievable code-breaking skills to outsmart Einstein.

And now it’s up to her to save the world…

Decades ago, Albert Einstein devised an equation that could benefit all life on earth—or destroy it. Fearing what would happen if the equation fell into the wrong hands, he hid it.

But now, a diabolical group known as the Furies are closing in on its location. In desperation, a team of CIA agents drags Charlie into the hunt, needing her brilliance to find it first—even though this means placing her life in grave danger.

In a breakneck adventure that spans the globe, Charlie must crack a complex code created by Einstein himself, struggle to survive in a world where no one can be trusted, and fight to keep the last equation safe once and for all.
Stuart Gibbs is the New York Times bestselling author of the Charlie Thorne series, FunJungle series, Moon Base Alpha series, Once Upon a Tim series, and Spy School series. He has written screenplays, worked on a whole bunch of animated films, developed TV shows, been a newspaper columnist, and researched capybaras (the world’s largest rodents). Stuart lives with his family in Los Angeles. You can learn more about what he’s up to at StuartGibbs.com.
2019 Parents' Choice Recommended Seal award winner

"Whether she’s catching big air on her snowboard or deciphering clues hidden by Albert Einstein, Charlie Thorne is an ideal hero for a new generation. Her pulse pounding adventure unfolds like one of the equations she’s so skilled at solving – the final answer remains concealed until every last variable has been uncovered."
— James Ponti, Edgar-award winning author of the Framed! and City Spies series

"Charlie is a terrific hero—outrageously smart, courageous, and still believable as a kid. After this explosive start, young readers will eagerly await her next adventure."
— Publishers Weekly

"Gibbs deftly pens an Alex Rider–level adventure with this series starter…It doesn’t take a theoretical physicist to predict that this series will be popular."
— Booklist