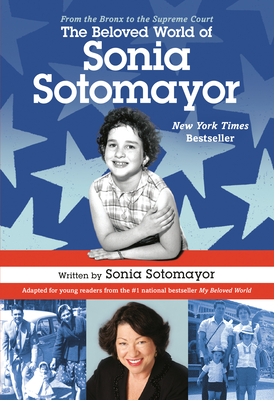 “[Doesn’t shy] away from the hard truths of Sotomayor’s childhood . . . [and] discusses real-world issues like racism, privilege, and affirmative action.” —The Washington Post

Discover the inspiring life of Justice Sonia Sotomayor, the first Latina and third woman appointed to the United States Supreme Court, in this middle-grade adaptation of her bestselling adult memoir, My Beloved World.

Sonia Sotomayor was just a girl when she dared to dream big. Her dream? To become a lawyer and a judge even though she’d never met one of either and none lived in her neighborhood.

Sonia did not let the hardships of her background—which included growing up in the rough housing projects of New York City’s South Bronx, dealing with juvenile diabetes, coping with parents who argued and fought personal demons, and worrying about money—stand in her way. Always, she believed in herself. Her determination, along with guidance from generous mentors and the unwavering love of her extended Puerto Rican family, propelled her ever forward.

Eventually, all of Sonia’s hard work led to her appointment as an Associate Justice of the United States Supreme Court in 2009, a role that she has held ever since.

Learn about Justice Sotomayor’s rise and her amazing work, as well as about the Supreme Court, in this fascinating memoir that shows that no matter the obstacles, dreams can come true.

Sonia Sotomayor graduated summa cum laude from Princeton University and from Yale Law School. She worked as an assistant district attorney in New York and then at the law firm of Pavia & Harcourt. She served as a judge of the US District Court, Southern District of New York, from 1992 to 1998, and from 1998 to 2009 she served on the United States Court of Appeals for the Second Circuit. In May 2009, President Barack Obama nominated her as an associate justice of the Supreme Court; she assumed this role on August 8, 2009.
"A lively autobiography of the third woman and the first Latina on the U.S. Supreme Court." —Booklist, starred review

"The account of this exceptional trajectory, told with a storyteller's talent, is filled with a candor and honesty that make her story eminently accessible to young readers. " —Kirkus Review, starred review

"Adapted from Sotomayor's memoir, My Beloved World. Her reflections on her childhood are perceptive and poignant. She writes about her life in an immigrant family . . . and as a Puerto Rican American straddling two cultures. . . . a work infused with warmth and encouragement." --School Library Journal