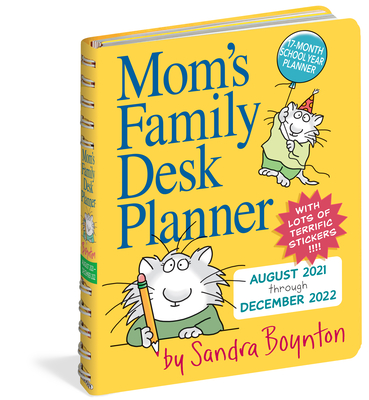 Out of Print - Not Available
It’s a portable personal assistant small enough to slip into a purse or tote so Mom can take it everywhere.

The combination of practical and whimsical is irresistible in this purse-sized weekly planner, with abundant Boynton art that's droll and delightful to Mom and everyone else. Each spread features a smartly designed grid with two columns: one for Mom’s goings-on and one for the rest of the family’s. With just a glance, Mom can know who has to be where, when. And every facing page has a  new Boynton illustration—befuddled cows, jaunty pigs, and skeptical cats galore. The planner includes storage pockets in the front and back covers, perforated grocery and to-do lists, and 150 stickers. (Because you can never have too many stickers.) Printed on FSC-certified paper.
Sandra Boynton is a popular American cartoonist, children's author, songwriter, producer, and director. Since 1974, Boynton has written and illustrated over sixty children's books and seven general audience books, including five New York Times bestsellers. More than 70 million of her books have been sold, "mostly to friends and family," she says. She has also written (with Michael Ford) and produced six albums of renegade children's music. Three of her albums have been certified Gold (over 500,000 copies sold), and Philadelphia Chickens, nominated for a Grammy, has gone Platinum (over 1 million copies sold). Boynton has also directed twelve music videos of her songs, including the award-winning "One Shoe Blues" starring B.B. King, "Alligator Stroll" starring Josh Turner, and "Tyrannosaurus Funk" (animation) sung by Samuel L. Jackson. She lives in rural New England, and her studio is in a barn with perhaps the only hippopotamus weathervane in America.