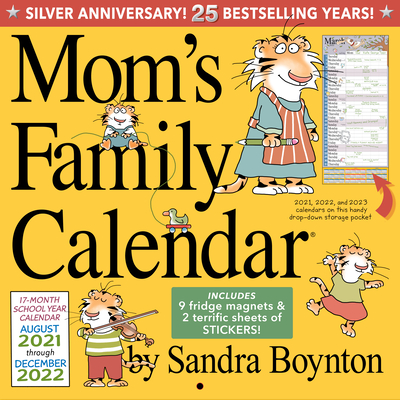 Out of Print - Not Available
Keep track of the whole family's comings and goings with the 25-year bestselling organizing wall calendar from Sandra Boynton!

Mom’s Family Calendar is perennially indispensable to moms, dads, and kids, too, with its rock-solid organizational prowess and captivating illustrations. Its unique grids are key to its power: arranged vertically, with five columns across the top (one for each family member) and the days of the month running down the left-hand side, there’s ample room to write down everyone’s comings and goings—and it’s  all visible at a glance. The bright, appealing pages feature Sandra Boynton’s distinctive and widely loved characters: the perplexed cats, the intrepid hippos, the enthusiastic pigs. Perfect.  Plus, the calendar includes a drop-down storage pocket, two sheets of stickers, and nine fun magnets. And it’s printed on FSC-certified paper.

•Spans 17 months, from August 2021 through December 2022
•Includes drop-down storage pocket, 2 sheets of stickers, and 9 terrific magnets
Sandra Boynton is a popular American cartoonist, children's author, songwriter, producer, and director. Since 1974, Boynton has written and illustrated over sixty children's books and seven general audience books, including five New York Times bestsellers. More than 70 million of her books have been sold, "mostly to friends and family," she says. She has also written (with Michael Ford) and produced six albums of renegade children's music. Three of her albums have been certified Gold (over 500,000 copies sold), and Philadelphia Chickens, nominated for a Grammy, has gone Platinum (over 1 million copies sold). Boynton has also directed twelve music videos of her songs, including the award-winning "One Shoe Blues" starring B.B. King, "Alligator Stroll" starring Josh Turner, and "Tyrannosaurus Funk" (animation) sung by Samuel L. Jackson. She lives in rural New England, and her studio is in a barn with perhaps the only hippopotamus weathervane in America.