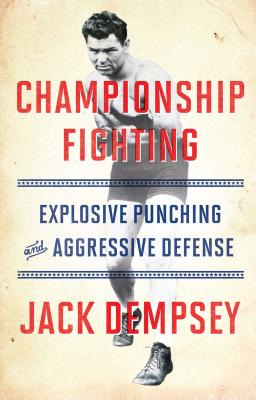 
Not in stock. At Our Partner Warehouse: Usually Ships in 4-7 Days
Fighting techniques and strategies from World Champion and Hall of Fame Boxer, Jack Dempsey.

Jack Dempsey, one of the greatest and most popular boxers of all time, reveals the techniques behind his unparalleled success in the ring. Straightforward and with detailed illustrations, Championship Fighting instructs the reader in the theory, training, and application of powerful punching, aggressive defense, proper stance, feinting, and footwork. The boxing methods Dempsey reveals will prove useful to both amateurs and professionals or anyone interested in teaching themselves how to box or practice martial arts.

“I was confident that I could take the rawest beginner, or even an experienced fighter, and teach him exactly what self-defense was all about.” —Jack Dempsey
Jack Dempsey (1895–1983) held the World Heavyweight Championship from 1919 to 1926. Many of his fights set financial and attendance records, including the first million-dollar gate. Dempsey was inducted into the Boxing Hall of Fame in 1951 and is considered to be one of the greatest boxers of the twentieth century.