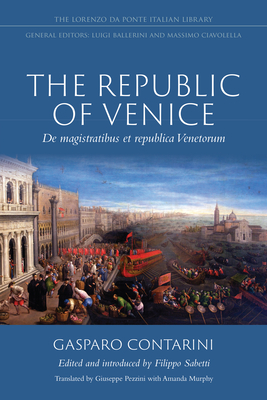 At a time when social scientists are increasingly focusing on the reasons why nations fail and democracies die, Filippo Sabetti turns to the opposite issue, asking instead why institutions endure. To do so, he presents Gasparo Contarini's sixteenth-century description of the Republic of Venice to help modern readers understand what made Venice the longest-lived self-constituted republic.

In its long history, Venice was the only city that succeeded in constructing a durable republicanism, and it was one of the earliest to depart from the hierarchical world of national monarchies and sovereignties. Sabetti suggests that students of politics will find Contarini's The Republic of Venice just as instructive, if not more so, as Machiavelli's The Prince. In his analysis of human nature, Contarini matches Machiavelli's secularism and realism, but goes much further; examining the case of Venice, he shows how it is possible for fallible human beings to construct a successful and stable government. This is the first modern English-language edition of Contarini's classic work, based directly on the original Latin.