A Heart in a Body in the World (Paperback) 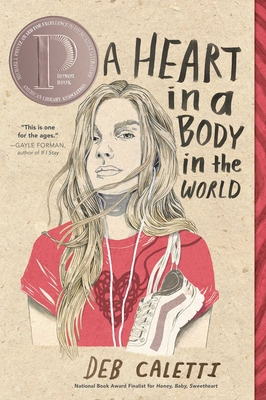 A Heart in a Body in the World (Paperback)


Email or call for price.
“This is one for the ages.” —Gayle Forman, author of the #1 bestseller If I Stay
“A book everyone should read right now.” —The New York Times Book Review
“A vital and heartbreaking story that brings together the #MeToo movement, the effects of gun violence, and the struggle of building oneself up again after crisis.” —Elle
“Equal parts heartbreaking and hopeful.” —BookPage

Each step in Annabelle’s 2,700-mile cross-country run brings her closer to facing a trauma from her past in National Book Award finalist Deb Caletti’s novel about the heart, all the ways it breaks, and its journey to healing. Because sometimes against our will, against all odds, we go forward.

Then…
Annabelle’s life wasn’t perfect, but it was full—full of friends, family, love. And a boy…whose attention Annabelle found flattering and unsettling all at once.

Until that attention intensified.

Now…
Annabelle is running. Running from the pain and the tragedy from the past year. With only Grandpa Ed and the journal she fills with words she can’t speak out loud, Annabelle runs from Seattle to Washington, DC and toward a destination she doesn’t understand but is determined to reach. With every beat of her heart, every stride of her feet, Annabelle steps closer to healing—and the strength she discovers within herself to let love and hope back into her life.

Annabelle’s journey is the ultimate testament to the human heart, and how it goes on after being broken.
Deb Caletti is the award-winning and critically acclaimed author of over sixteen books for adults and young adults, including Honey, Baby, Sweetheart, a finalist for the National Book Award; A Heart in a Body in the World, a Michael L. Printz Honor Book; Girl, Unframed; and One Great Lie. Her books have also won the Josette Frank Award for Fiction, the Washington State Book Award, and numerous other state awards and honors, and she was a finalist for the PEN USA Award. She lives with her family in Seattle.
A guy in a parking lot leers at her, and Annabelle Agnelli takes off running. Eleven miles later, she stops, only to realize that running is exactly what she needs to do. Not just an impromptu, panic-stricken bolt, but an outlandishly extreme run that will take her from Seattle to Washington, D.C. It might help with her PTSD, and it might help her come to terms with her body. It will surely give her time to mourn the terrible losses of the previous year, and atone for the role she was never meant to play. This remarkable book traces Annabelle’s cross-country adventure while gradually peeling apart the events that led to the trauma she’s running from. Annabelle was on the rebound from a disrupted relationship when she befriends a socially awkward boy, now known only as “The Taker.” Annabelle couldn’t decide if he was weird or cute and tried not to encourage him, but looking back, she is tormented by her every smile and kindness. Through Annabelle, Caletti rips apart the contradictions of a society that commands women to be compliant and pleasing and then blames them for male responses to their attractiveness, however violent they might be. This timely, well-written novel is crucial reading in the days of #metoo. — Diane Colson
— Booklist *STARRED REVIEW*

Annabelle Agnelli runs from Seattle to Washington, D.C., in an attempt to outrun a traumatizing incident that occurred less than a year earlier. Eighteen-year-old Seattleite Annabelle is hardworking, pretty, and seemingly has it all: good grades, great friends, and a loving family. Following a tragedy, however, Annabelle is wracked with guilt over a crime she did not commit but feels responsible for, and as a result, she suffers from severe anxiety and PTSD. The only thing she feels she can do now is run. Joined by her Italian immigrant grandfather, Grandpa Ed, in his RV and cheered on by a self-appointed publicity team comprising her 13-year-old brother, Malcolm, and her friends Zach (indicated East Asian by his surname) and Olivia (presumed white), Annabelle runs across the nation in an attempt to come to terms with the event perpetrated by a person whom she dubs The Taker. Written in the present tense, Caletti's (What's Become of Her, 2017, etc.) narrative conveys a sense of urgency and immediacy as she presents issues familiar to many young women, including rape culture, violence, and the internalization of guilt and social critique. A timely novel with strong secondary characters that emphasizes the complexities of the heart and doing what is right. (Fiction. 14-adult)
— Kirkus STARRED REVIEW

Seventeen-year-old Annabelle Agnelli needs to run away from tragedy. She starts in her hometown of Seattle with the intention to run 2,700 miles to Washington, D.C. As she crosses the vast and lonely terrain, she has flashbacks that gradually reveal what she is trying to flee. She runs to punish herself for the crime she thinks she has committed; she runs to feel the pain she thinks she deserves. Annabelle unwittingly becomes a spokesperson for a greater cause and a reluctant role model. Caletti tackles two big topics—gun violence and violence against women—with enormous skill. Annabelle’s story never seems forced or heavy-handed; Caletti realistically mines the gray areas of the teen’s conscience. Portrayals of complex, multifaceted secondary characters and vivid descriptions of the protagonist’s surroundings permeate this story and make it come to life. Readers can almost smell the pine trees, see the glimmering lake water, and feel the steamy heat rising off of the pavement as Annabelle runs across the country. They can also feel her confusion and pain, which makes her hard-won self-redemption most rewarding. ­VERDICT A moving novel centered on ­timely issues that deserves a place in all libraries serving young adults.–Melissa Kazan, Horace Mann School, NY

“Masterful… This is one for the ages.” –Gayle Forman, New York Times bestselling author of If I Stay

“Caletti’s novel dazzlingly maps the mind-blowing ferocity and endurance of an athlete who uses her physical body to stake claim to the respect of the nation.” –E. Lockhart, New York Times bestselling author of Genuine Fraud and We Were Liars

“More than bittersweet… It will nestle inside your brain as well as your heart.” –Jodi Lynn Anderson, award-winning author of Midnight at the Electric

It’s been nine months since an unnamed act of violence left runner Annabelle “broken and guilty and scared.” When an incident at a restaurant triggers bad memories for the high school senior, she takes off running, forming a plan to go 2,719 miles, from Seattle to Washington, D.C. In a powerful story of a survivor trying to regain a sense of justice and power, Caletti (Honey, Baby, Sweetheart) details a young woman’s harrowing psychological and physical journey across the United States. Thanks to support—written with tender detail, her younger brother and friends create a GoFundMe website, her grandfather trails her in his well-equipped RV, and a growing fan base cheers her on—Annabelle’s trek quickly evolves into a cause. What happened to Annabelle and why she feels compelled to run to the nation’s capital remain undefined until the book’s end, when a series of flashbacks playing in the heroine’s mind reveal clues as she battles exhaustion, dehydration, and pain during her 16-mile-a-day run. Caletti expresses familiar themes about what it can be like to live as a woman in U.S. society, constantly guarding against threat (“What are you supposed to do when you’re also required to be kind and helpful as well as vigilant?”). Annabelle’s determination to make a difference in spite of her fears sends an inspiring and empowering message.
— Publishers Weekly *STARRED REVIEW

Annabelle is running. It starts as a momentary impulse, when emotions over a recent trauma crash in on her as she waits in a fast-food line, but now she thinks it’s her purpose, and the former high school track athlete decides she’s going to run from her home in Seattle to Washington, D.C. Annabelle has the support of her staunch little brother and beloved hometown friends, and soon her retired grandfather trundles along in his RV to provide her with a backup vehicle, home-cooked meals, and Italian curses. As Annabelle runs, her past acquaintance with a boy she labels only as “The Taker” plays out in brief flashback scenes that spiral down into guilt and grief and that gradually accrue into a high-tension, dread-infused leadup to a catastrophic event. Caletti takes the familiar road-trip genre and changes it up for a story of foot-driven travel, infused with the pounding rhythm of Annabelle’s stride and involving intimate encounters with scenery and people all across the country. This is also a story of the dilemma of being young and female, of being inculcated with the message that it’s important to be nice and that you are responsible for the emotions of other people, and straining to find messages about your own wants or even safety to counterbalance. The book’s slow reveal of the harrowing tragedy is executed here with rare meaning as Annabelle herself, alone on the road, inches closer to the pain she’s attempting to survive. What makes this book particularly affecting is the overwhelming kindness of people, whether her intimates or strangers along the way, who cheer and help Annabelle along her journey. Annabelle exemplifies persisting nevertheless, with her running body and with her heart, and readers will understand her turmoil and cheer her resilience.
— BCCB *STARRED REVIEW

"A moving, unfortunately timely, and gut-wrenching story that will stick with you."
— Bustle

"This is, quite simply, a book everyone should read right now."
— New York Times Book Review