The Coffin Ship: Life and Death at Sea During the Great Irish Famine (Hardcover) 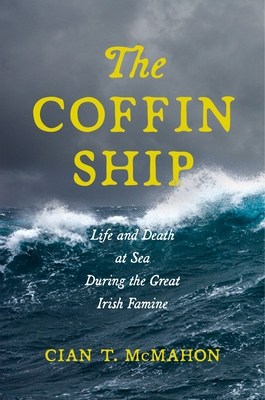 The Coffin Ship: Life and Death at Sea During the Great Irish Famine (Hardcover)

A vivid, new portrait of Irish migration through the letters and diaries of those who fled their homeland during the Great Famine The standard story of the exodus during Ireland's Great Famine is one of tired clich's, half-truths, and dry statistics. In The Coffin Ship, a groundbreaking work of transnational history, Cian T. McMahon offers a vibrant, fresh perspective on an oft-ignored but vital component of the migration experience: the journey itself. Between 1845 and 1855, over two million people fled Ireland to escape the Great Famine and begin new lives abroad. The so-called "coffin ships" they embarked on have since become infamous icons of nineteenth-century migration. The crews were brutal, the captains were heartless, and the weather was ferocious. Yet the personal experiences of the emigrants aboard these vessels offer us a much more complex understanding of this pivotal moment in modern history. Based on archival research on three continents and written in clear, crisp prose, The Coffin Ship analyzes the emigrants' own letters and diaries to unpack the dynamic social networks that the Irish built while voyaging overseas. At every stage of the journey--including the treacherous weeks at sea--these migrants created new threads in the worldwide web of the Irish diaspora. Colored by the long-lost voices of the emigrants themselves, this is an original portrait of a process that left a lasting mark on Irish life at home and abroad. An indispensable read, The Coffin Ship makes an ambitious argument for placing the sailing ship alongside the tenement and the factory floor as a central, dynamic element of migration history.
Cian T. McMahon is Associate Professor in the Department of History and Honors College at the University of Nevada, Las Vegas and author of The Global Dimensions of Irish Identity: Race, Nation, and the Popular Press, 1840-1880 (2015).