Frank and Fearless: A Life in Boxing (Hardcover) 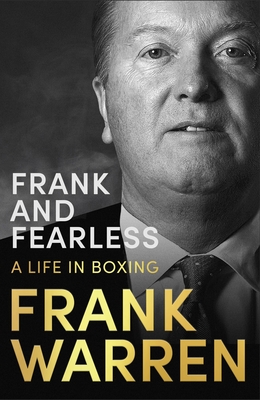 Frank and Fearless: A Life in Boxing (Hardcover)


Not Yet Published - Available for Pre-Order Now

The story of my life would be a bloody sight shorter if the man who tried to murder me outside the Broadway Theatre in Barking on a winter's evening in 1989 had succeeded. He nearly did.

Frank Warren has spent forty years working with boxing's most colourful and controversial characters. In his long-awaited autobiography, he reflects on the battles he had to win to reach the top and remain there, not least the battle to stay alive after he was shot at point-blank range in an attempted assassination in 1989.

In Frank and Fearless, Warren pulls no punches, taking us behind the scenes into a world of blood and sweat, and intense relationships that all too often end in tears. Under Warren's careful stewardship, Frank Bruno, Naseem Hamed, Joe Calzaghe, Ricky Hatton, Amir Khan and Tyson Fury all became world champions. So did Terry Marsh, the man who was later accused, and cleared, of trying to murder him. Along the way, Warren has been assaulted in a hotel room by the formidable Mike Tyson and gone toe to toe in a court room with his erstwhile partner, the flamboyant Don King.

However, boxing is only part of the story that begins on a council estate in 1950s North London, where Warren first learnt how to stand up to bullies. That was how he overcame and outwitted the powerful cartel that controlled British boxing and tried to stop his career before it started, and it is why he is still around to reflect on his remarkable life.

With cameo appearances from Frank Sinatra, Luciano Pavarotti, Pink Floyd and the Philadelphia mafia, Frank and Fearless is the unflinchingly candid and hard-hitting memoir of Britain's most famous and influential boxing promoter.

In an era spanning forty years, Hall of Fame boxing promoter and manager Frank Warren has worked with some of the biggest fighters in boxing history. Naseem Hamed, Frank Bruno, Mike Tyson, Joe Calzaghe, Nigel Benn, Steve Collins, Chris Eubank, Amir Khan and Ricky Hatton are some of the iconic names he has promoted during his career.