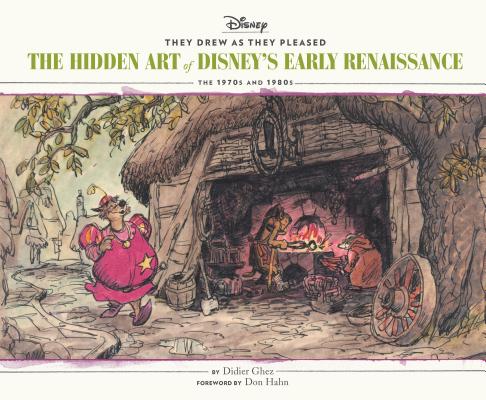 In the 1970s and 1980s, the Disney animation studio redefined its creative vision in the wake of Walt Disney's death. This latest volume from renowned Disney historian Didier Ghez profiles Ken Anderson and Mel Shaw, whose work defined beloved classic Disney characters from films like The Jungle Book, The Aristocats, Robin Hood, and The Rescuers. With vivid descriptions of passages from the artists' autobiographies and interviews, accompanied by never-before-seen images of their art and process, this visually rich collection offers a rare view of the Disney leg¬ends whose work helped shape the nature of character and story development for generations to come.

Copyright ©2019 Disney Enterprises, Inc. All Rights Reserved
Didier Ghez is the author and editor of numerous books about the Disney studio and its artists, including the books in the Walt's People series and in the They Drew as They Pleased series. In 2018, Ghez received the prestigious June Foray Award for significant and benev¬olent impact on the art and industry of animation. He lives in Coral Gables, Florida.

Don Hahn is producer of The Lion King and Beauty and the Beast, the first animated film to be nominated for a Best Picture Oscar®. His other credits include The Hunchback of Notre Dame, Maleficent, and the 2017 box office hit Beauty and the Beast. Hahn serves on the board of directors of PBS SoCal and the Advisory Committee of the Walt Disney Family Museum. He lives in Los Angeles.
Holiday gift pick "This is a whimsical look at the '70s and '80s eras of Disney animated films like 'The Jungle Book,' 'The Aristocats,' ,Robin Hood', and 'The Rescuers.'"
-Business Insider

"The stories of Ken Anderson and Mel Shaw come to life in a whole new way, with page-after-page of artwork from each luminary from their entire career at Disney...I'm always fascinated by what could've been, which is part of the thrill of this series. Disney Animation fans get to learn more about some shelved projects, which span from some unproduced shorts to feature films. Some rare concept art from projects like Chanticleer, Musicana, Reynard the Fox, The Rainbow Road to Oz, Catfish Bend, Hamster Hamlet, Scruffy, The Little Broomstick, and The Hero from Otherwhere. More information on what each film could've been like can be found in the chapters, backed up by developmental artwork."
- The Laughing Place

"A strength of this book is that it does focus on the films through the lens of Anderson and Shaw's work, diving deep into their entire careers at Disney. It is a biography of them as much as it is a book of art, and I really appreciate the attention to detail. Half of the fun of books like this is following the process of sketch to screen, and by making the men behind the drawings very real, it really adds to the story."
-Cultured Vultures

Holiday Gift Pick "In the 1970s and 80s, the two artists brought their creative talents to bear on cherished films such as Robin Hood and The Rescuers. They Drew as They Pleased abounds with their colorful concept drawings, character designs and sketches and includes fascinating facts about their working methods. From start to finish, the book is a Disney lover's dream-and a stellar tribute to a pair of animation pioneers."
-BookPage

"Didier Ghez's series for Chronicle Books under the umbrella title 'They Drew as They Pleased' has been the most consistently excellent series of Disney art books of the last few decades...The reason is not hard to spot, especially when you read Ghez's preface for the newest volume. He has an affection for the drawings reproduced in the books, and an absorbing interest in them, that other writers simply cannot match."
- Michael Barrier

"Posterity will thank the indefatigable Didier Ghez for his research, but we can express our gratitude right now for his valuable series of handsome sketchbooks. The latest entry in this "hidden art" series features two of the studio's most prolific and reliable artists, Ken Anderson and Mel Shaw. Both men started with Walt Disney in the 1930s but their well of visual ideas never ran dry. Toward the end of their careers they were tasked with creating character designs and concept art for upcoming projects. This book offers generous examples of their work, from pen-and-ink sketches to full color renderings. It's a joy to leaf through these pages and appreciate their artistry."