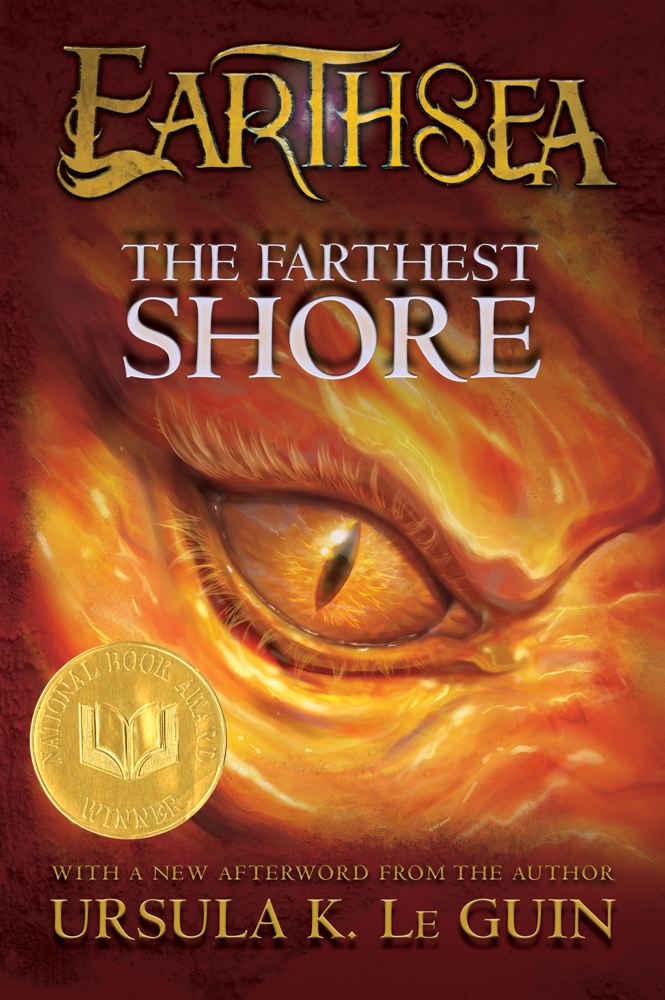 This is book number 3 in the Earthsea Cycle series.

The National Book Award–winning third novel in the renowned Earthsea series from Ursula K. LeGuin gets a beautiful new repackage.

In this third book in the Earthsea series, darkness threatens to overtake Earthsea: The world and its wizards are losing their magic. But Ged Sparrohawk—Archmage, wizard, and dragonlord—is determined to discover the source of this devastating loss.
Aided by Enlad’s young Prince Arren, Ged embarks on a treacherous journey that will test their strength and will. Because to restore magic, the two warriors must venture to the farthest reaches of their world—and even beyond the realm of death.
With millions of copies sold worldwide, Ursula K. Le Guin’s Earthsea Cycle has earned a treasured place on the shelves of fantasy lovers everywhere, alongside the works of such beloved authors as J.R.R. Tolkien and C.S. Lewis. Now the full Earthsea collection—A Wizard of Earthsea, The Tombs of Atuan, The Farthest Shore, Tehanu, Tales from Earthsea, and The Other Wind—is available with a fresh, modern look that will endear it both to loyal fans and new legions of readers.
Ursula K. Le Guin (1929–2018) was the celebrated author of twenty-three novels, twelve volumes of short stories, eleven volumes of poetry, thirteen children’s books, five essay collections, and four works of translation. Her acclaimed books received the Hugo, Nebula, Endeavor, Locus, Otherwise, Theodore Sturgeon, PEN/Malamud, and National Book Awards; a Newbery Honor; and the Pushcart and Janet Heidinger Kafka Prizes, among others. In 2014, she was awarded the National Book Foundation Medal for Distinguished Contribution to American Letters, and in 2016 joined the short list of authors to be published in their lifetimes by the Library of America. Le Guin was also the recipient of the Association for Library Service to Children’s May Hill Arbuthnot Honor Lecture Award and the Margaret A. Edwards Award. She received lifetime achievement awards from the World Fantasy Convention, Los Angeles Times, Pacific Northwest Booksellers Association, and Willamette Writers, as well as the Science Fiction and Fantasy Writers of America Grand Master Award and the Library of Congress Living Legend Award. Her website is UrsulaKLeGuin.com.
"New and longtime Earthsea fans will be drawn to these impressive new editions."
— The Horn Book