Who's Afraid of Post-Blackness?: What It Means to Be Black Now (Paperback) 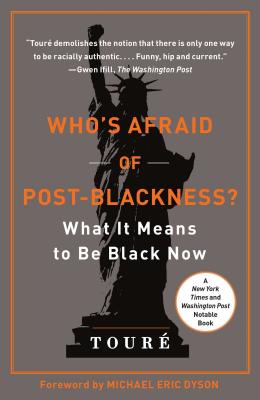 Who's Afraid of Post-Blackness?: What It Means to Be Black Now (Paperback)


Click Title to See Location Inventory
In this provocative book, writer, and cultural critic Touré explores the concept of Post-Blackness: the ability for someone to be rooted in but not restricted by their race.

Touré begins his book by examining the concept of “Post-Blackness,” a term that defines artists who are proud to be Black, but don't want to be limited by identity politics and boxed in by race. He soon discovers that the desire to be rooted in but not constrained by Blackness is everywhere. In Who’s Afraid of Post-Blackness? he argues that Blackness is infinite, that any identity imaginable is Black, and that all expressions of Blackness are legitimate.

Here, Touré divulges his own intimate, funny, and painful experiences of how race and racial expectations have shaped his life. He explores how the concept of Post-Blackness functions in politics, society, psychology, art, culture, and more. He knew he could not tackle this topic all on his own so he turned to 105 of the most important luminaries of our time for frank and thought-provoking opinions, including the Reverend Jesse Jackson, Cornel West, Henry Louis Gates Jr., Malcolm Gladwell, Michael Eric Dyson, Melissa Harris-Perry, Harold Ford Jr., Kara Walker, Kehinde Wiley, Glenn Ligon, Paul Mooney, New York Governor David Paterson, Greg Tate, Aaron McGruder, Soledad O'Brien, Kamala Harris, Chuck D, Mumia Abu-Jamal, and many others.

By engaging this brilliant, eclectic group, and employing his signature insight, courage, and wit, Touré delivers a clarion call on race in America and how we can change our perceptions for a better future. Destroying the notion that there is a correct way of being Black, Who’s Afraid of Post-Blackness? will change how we perceive race forever.
Touré is an author who has published six books, including I Would Die 4 U: Why Prince Became an Icon and Who’s Afraid of Post-Blackness?: What It Means to Be Black Now, a New York Times and Washington Post Notable Book. He was a TV host at MSNBC, MTV, and BET, and a correspondent at CNN. He hosts the podcast Touré Show. He has written for The New York Times, The New Yorker, Rolling Stone, The Washington Post, The Nation, Vogue, and many other publications. He lives in Brooklyn with his wife and two children. Follow his Instagram @Toure.

“One of the most acutely observed accounts of what it is like to be young, black and middle-class in America. Toure inventively draws on a range of evidence . . . for a performance carried through with unsparing honesty, in a distinctive voice that is often humorous, occasionally wary and defensive, but always intensely engaging.” —Orlando Patterson, The New York Times Book Review

“The ever provocative Touré boldly articulates the complicated issues of self and racial identity in the age of Obama.” —Vanity Fair


"A welcome response to the 'self-appointed identity cops' who would arrest and banish those they consider insufficiently black. Perceptively analyze[s] a new sensibility in black art and culture to illustrate the complex and fluid racial identification Touré dubs 'post-blackness.' "—The San Francisco Chronicle


“This book is quintessential Touré: smart, funny, irreverent, and provocative as hell. Rejecting old school racial dogma and new school myths about post-raciality, he offers a powerful and original thesis on the status of Blackness in the 21st century. Through his sharp analysis and honest reflections, Touré challenges us to embrace a more mature, sophisticated, and ultimately liberating notion of racial identity. Any serious conversation on race and culture must begin with this book.”

“Who's Afraid of Post-Blackness is a necessary book. To fulfill your potential as an individual or as a people, you need a clear sense of self. Touré has done the difficult but liberating work of moving the discussion of race beyond the Black Power-era thinking of the 1970's into the 21st Century.”

“Touré candidly tackles a burning issue confronting us today. Black America is undeniably a community 'free, but not equal,' and people from all walks of life are compelled to devise new approaches to confronting today's structural inequalities. Here Touré explores insights from many perspectives to help guide the way.”

“A fascinating conversation among some of America’s most brilliant and insightful Black thinkers candidly exploring Black identity in America today. Touré powerfully captures the pain and dissonance of Black Americans’ far too often unrequited love for our great nation.”

—Benjamin Todd Jealous, President and CEO of the NAACP

“Who's Afraid of Post-Blackness is a tour de force! I applaud Touré’s courage in standing up and telling it like it is. This special book will make you think, laugh, cry—and it will make you look at race and at yourself differently.”

“Touré has taken a question I have asked myself uncountable times over the course of my life and asked it of everyone: ‘What does it mean to be Black?’ The answers in this book are thought-provoking, uplifting, hilarious and sometimes sad. His sharp writing and self-effacing stories help digest some hard facts about how identity can be used for and against each of us – and why it matters so much to all of us.”

“Touré is one of my favorite writers. I’ve watched him grow and mature into the thinking man's writer for the new era. Extremely observant on class and culture, this book is a must-have guide from one of the few remaining minds with the courage to tell the truth about America's beautiful stain.”

—Questlove, from the Roots