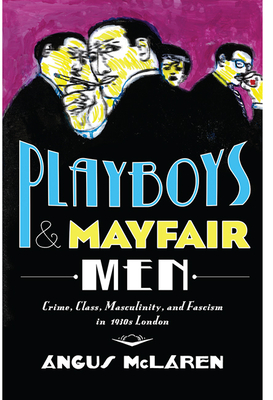 The shocking true story of a diamond theft gone wrong.

In December 1937, four respectable young men in their twenties, all products of elite English public schools, conspired to lure to the luxurious Hyde Park Hotel a representative of Cartier, the renowned jewelry firm. There, the "Mayfair men" brutally bludgeoned diamond salesman Etienne Bellenger and made off with eight rings that today would be worth approximately half a million pounds. Such well-connected young people were not supposed to appear in the prisoner's dock at the Old Bailey. Not surprisingly, the popular newspapers had a field day responding to the public's insatiable appetite for news about the upper-crust rowdies and their unsavory pasts.

In Playboys and Mayfair Men, Angus McLaren recounts the violent robbery and sensational trial that followed. He uses the case as a hook to draw the reader into a revelatory exploration of key interwar social issues, from masculinity and cultural decadence to broader anxieties about moral decay. In his gripping depiction of Mayfair's celebrity high life, McLaren describes the crime in detail, as well as the police investigation, the suspects, their trial, and the aftermath of their convictions.

Angus McLaren is emeritus professor of history at the University of Victoria. He is the author of Sexual Blackmail: A Modern History, Impotence: A Cultural History, and A Prescription for Murder: The Victorian Serial Killings of Dr. Thomas Neill Cream.