The British Table: A New Look at the Traditional Cooking of England, Scotland, and Wales (Hardcover) 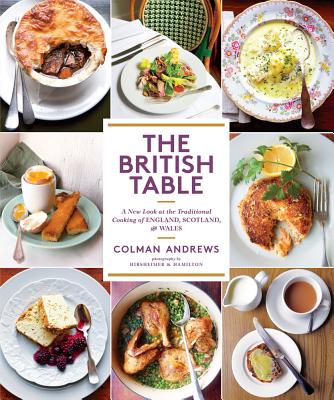 The British Table: A New Look at the Traditional Cooking of England, Scotland, and Wales (Hardcover)

The British Table: A New Look at the Traditional Cooking of England, Scotland, and Wales celebrates the best of British cuisine old and new. Drawing on a vast number of sources, both historical and modern, the book includes more than 150 recipes, from traditional regional specialties to modern gastropub reinventions of rustic fare. Dishes like fish pie, braised brisket with pickled walnuts, and a pastry shop full of simple, irresistible desserts have found their way onto modern British menus—delicious reminders of the depth and breadth of Britain’s culinary heritage. The book blends these tradition-based reinventions by some of the finest chefs in England, Scotland, and Wales with forgotten dishes of the past worthy of rediscovery.

Colman Andrews is the recipient of eight James Beard Awards, including the 2010 Cookbook of the Year award for The Country Cooking of Ireland. A founding editor of Saveur, he is the author of eight previous books on food, including Catalan Cuisine, Ferran: The Inside Story of El Bulli and the Man Who Reinvented Food, and My Usual Table: A Life in Restaurants, a memoir. He lives in Connecticut.

Christopher Hirsheimer and Melissa Hamilton are cofounders of Canal House and the authors of many cookbooks, including Canal House Cooks Every Day.

Christopher Hirsheimer and Melissa Hamilton are cofounders of Canal House and the authors of many cookbooks, including Canal House Cooks Every Day.
"I always want to know what Colman Andrews is thinking about when it comes to food. His writing changes the way I cook, and I look forward to every book. The British Table is no exception—it is filled with so many fascinating recipes to help us discover the traditional cooking and culture of England, Scotland, and Wales."
— Alice Waters, founder of Chez Panisse and The Edible Schoolyard

"This book makes me so hungry! Leafing through these beautiful pages of unfussy food, I find myself wanting to cook everything, eat everything—or just climb on the first plane to England."
— Ruth Reichl, former editor-in-chief of Gourmet and author of My Kitchen Year

"Both a lovely and a loving book."
— Nigella Lawson