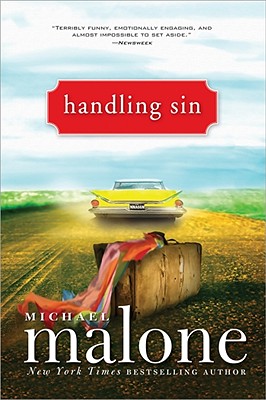 On the Ides of March, our hero, Raleigh Whittier Hayes (forgetful husband, baffled father, prosperous insurance agent, and leading citizen of Thermopylae, North Carolina), learns that his father has discharged himself from the hospital, taken all his money out of the bank and, with a young black female mental patient, vanished in a yellow Cadillac convertible. Left behind is a mysterious list of seven outrageous tasks that Raleigh must perform in order to rescue his father and his inheritance.

And so Raleigh and fat Mingo Sheffield (his irrepressibly loyal friend) set off on an uproarious contemporary treasure hunt through a landscape of unforgettable characters, falling into adventures worthy of Tom Jones and Huck Finn. A moving parable of human love and redemption, Handling Sin is Michael Malone's comic masterpiece.

Michael Malone is the author of ten novels, a collection of short stories, and two works of nonfiction. Educated at Carolina and at Harvard, he is now a professor in Theater Studies at Duke University. Among his prizes are the Edgar, the O. Henry, the Writers Guild Award, and the Emmy. He lives in Hillsborough, North Carolina, with his wife.