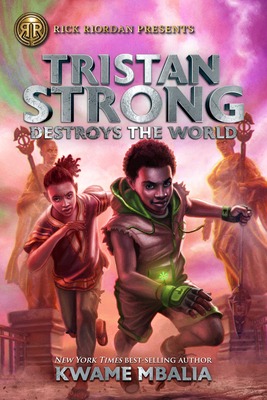 This is book number 2 in the Tristan Strong series.

Tristan Strong, just back from a victorious but exhausting adventure in Alke, the land of African American folk heroes and African gods, is suffering from PTSD. But there's no rest for the weary when his grandmother is abducted by a mysterious villain out for revenge.

Tristan must return to Alke--and reunite with his loud-mouthed sidekick, Gum Baby--in order to rescue Nana and stop the culprit from creating further devastation. Anansi, now a "web developer" in Tristan's phone, is close at hand to offer advice, and several new folk heroes will aid Tristan in his quest, but he will only succeed if he can figure out a way to sew broken souls back together.

*"Well-paced--just like the previous installment--this sequel focuses on themes such as the meaning of diaspora and the effects of trauma, making for a more nuanced and stronger story than the first. Packs a punch."--Kirkus (starred review)

Endorsed by Rick Riordan, author of Percy Jackson and the Olympians, soon to be a series on Disney+.
Kwame Mbalia is the New York Times best-selling author of Tristan Strong Punches a Hole in the Sky, for which he received a Coretta Scott King Author Honor award.The book was also named to best-of-the-year listscompiled by Publishers Weekly, the Chicago Public Library, and the New York Times.The second book in the trilogy is Tristan Strong Destroys the World. Kwame lives with his wife and children in Raleigh, North Carolina, where he is currently working on the third book about Tristan. Follow him on Twitter @KSekouM.
"Mbalia's universe continues to excite through sheer conceptual brilliance, nonstop action and adventure, and--let's be honest--the comical aggression of sidekick god Gum Baby."—Booklist

"The world building of this series is truly spectacular and easily comparable to the best titles in children's literature."—Nerds and Beyond

*"Mbalia returns with a sequel as impressive and even more compelling, offering all the power-packed goodness of the previous volume, with well-plotted pacing and a quick-witted narrative voice. A stunning conclusion will leave readers breathless and eager for the next installment."—Bulletin of the Center for Children's Books (starred review)

*"Well-paced--just like the previous installment--this sequel focuses on themes such as the meaning of diaspora and the effects of trauma, making for a more nuanced and stronger story than the first. Packs a punch."—Kirkus Reviews (starred review)

*"Mbalia's African American and West African gods (with villains tied to U.S. chattel slavery and the Middle Passage specifically) touch on the tensions between the cultures, a cultural nuance oft overlooked. Readers who want more than just a taste of Alke will be eager for future books. A worthy addition to the diverse array of offerings from Rick Riordan Presents."—Kirkus (starred review)

*"Overall a stellar mix of the playful and the serious, the traditional and the original, this novel marks the emergence of a strong new voice in myth-based children’s fantasy."—BCCB (starred review)

*"Perfectly paced, this cinematic adventure never drags, anchored by Tristan’s conversational narration and balanced by his struggle to cope with a friend’s passing. It brims with heart, humor, and action, successfully crafting a beautifully unified secondary world that brings the power of stories to glorious life."—Booklist (starred review)

*"Tristan’s voice rings true and sympathetic, while the irrepressible Gum Baby steals every scene. Mbalia expertly weaves a meaningful portrayal of family and community with folklore, myth, and history—including the legacy of the slave trade—creating a fast-paced, heroic series starter."—Publishers Weekly (starred review)