A Circle of Elephants: A Companion Novel (Hardcover) 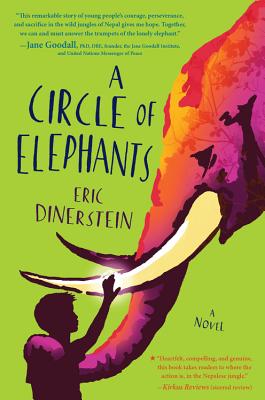 A Circle of Elephants: A Companion Novel (Hardcover)


Click Title to See Location Inventory
From the author of What Elephants Know, a 2017 ALA Notable Children's Book and winner of the 2017 South Asia Book Award for Children's and Young Adult Literature, comes this stunning companion novel about the complex relationship between people and nature coexisting in the Borderlands of 1970s Nepal.

Thirteen-year-old Nandu lives in the newly established Royal Elephant Breeding Center on the edge of the jungle. Here, the King's elephants are to be raised under the protective watch of the stable. Nandu-along with his adoptive father Subba-sahib, his mentors, friends, and the rest of the elephant drivers-is tested by man and nature as earthquakes, drought, wild herds, and rumors of poachers threaten the Center.

When Nandu's world is thrown into turmoil, so, too, is the world of Hira Prasad, the Center's powerful bull elephant. An unbreakable bond of brotherhood drives Nandu and Hira Prasad together as they struggle to maintain the delicate natural order of life in the Borderlands.

Dinerstein's poetic prose and scientific expertise come together in this breathtaking tale that transports the reader to the center of dangerous conflicts and heartbreaking friendships.
Eric Dinerstein, PhD, attended Northwestern University and Western Washington University and did his graduate studies in wildlife science at the University of Washington. He is the Director of biodiversity and wildlife solutions at Resolve, where he devotes his time to the conservation of wild populations of elephants, rhinos, tigers, and other endangered species. He was previously chief scientist and vice president for conservation science at the World Wildlife Fund for nearly twenty-five years.

Dinerstein began researching tigers in Nepal in 1975 as a Peace Corps volunteer. He later continued fieldwork in the region, studying rhinos and tigers for the Smithsonian Institution. Dinerstein's nonfiction works include The Return of the Unicorns: The Natural History and Conservation of the Greater One-Horned Rhinoceros; Tigerland and Other Unintended Destinations; and The Kingdom of Rarities.
PRAISE FOR WHAT ELEPHANTS KNOW

"It is such a refreshing journey into another elephant world, very special to Asia, indeed Nepal, resonant with an afterglow of Mowgli, and Eric Dinerstein's own deep feelings about the jungle, and the people and the wildlife that live there."—Iain Douglas-Hamilton, DPhil, CBE, founder, Save the Elephants, and coauthor of Among the Elephants