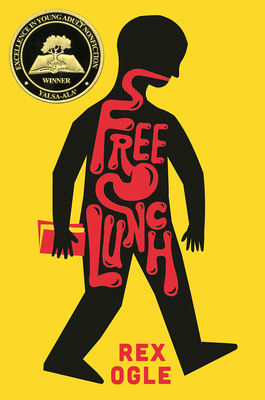 Winner of the 2020 YALSA Excellence in Nonfiction Award.

Instead of giving him lunch money, Rex’s mom has signed him up for free meals. As a poor kid in a wealthy school district, better-off kids crowd impatiently behind him as he tries to explain to the cashier that he’s on the free meal program. The lunch lady is hard of hearing, so Rex has to shout.


Free Lunch is the story of Rex’s efforts to navigate his first semester of sixth grade—who to sit with, not being able to join the football team, Halloween in a handmade costume, classmates and a teacher who take one look at him and decide he’s trouble—all while wearing secondhand clothes and being hungry. His mom and her boyfriend are out of work, and life at home is punctuated by outbursts of violence. Halfway through the semester, his family is evicted and ends up in government-subsidized housing in view of the school. Rex lingers at the end of last period every day until the buses have left, so no one will see where he lives.

Unsparing and realistic, Free Lunch is a story of hardship threaded with hope and moments of grace. Rex’s voice is compelling and authentic, and Free Lunch is a true, timely, and essential work that illuminates the lived experience of poverty in America.

Rex Ogle was born and raised mostly in Texas. He received the 2020 YALSA Excellence in Nonfiction Award for his memoir Free Lunch. A former children’s book editor in New York City, Rex now lives in Los Angeles with his partner.
Outstanding, gracious writing and a clear eye for the penetrating truth. A mighty portrait of poverty amid cruelty and optimism.
— Kirkus Reviews (starred review)

With candor and vivid detail, Ogle’s debut captures the experience of chronic poverty in the United States...Ogle’s emotional honesty pays off in the form of complex characterization and a bold, compassionate thesis.
— Publishers Weekly (starred review)