Nomad Century: How Climate Migration Will Reshape Our World (Hardcover) 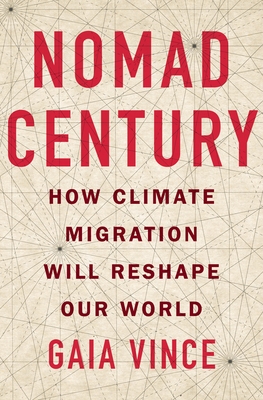 Nomad Century: How Climate Migration Will Reshape Our World (Hardcover)

“The MOST IMPORTANT BOOK I imagine I'll ever read.”—Mary Roach

FROM AN AWARD-WINNING SCIENCE JOURNALIST comes an urgent investigation of environmental migration—the most underreported, seismic consequence of our climate crisis that will force us to change where—and how—we live.

“An IMPORTANT and PROVOCATIVE start to a crucial conversation.” —Bill McKibben


“We are facing a species emergency. We can survive, but to do so will require a planned and deliberate migration of a kind humanity has never before undertaken. This is the biggest human crisis you’ve never heard of.”

Drought-hit regions bleeding those for whom a rural life has become untenable. Coastlines diminishing year on year. Wildfires and hurricanes leaving widening swaths of destruction. The culprit, most of us accept, is climate change, but not enough of us are confronting one of its biggest, and most present, consequences: a total reshaping of the earth’s human geography. As Gaia Vince points out early in Nomad Century, global migration has doubled in the past decade, on track to see literal billions displaced in the coming decades. What exactly is happening, Vince asks? And how will this new great migration reshape us all?

In this deeply-reported clarion call, Vince draws on a career of environmental reporting and over two years of travel to the front lines of climate migration across the globe, to tell us how the changes already in play will transform our food, our cities, our politics, and much more. Her findings are answers we all need, now more than ever.

Gaia Vince is an award-winning science journalist, author, broadcaster and speaker. She is the author of Nomad Century, Transcendence, and Adventures in the Anthropocene.

“Gaia Vince’s new book should be read not just by every politician, but by every person on the planet. ” —The Guardian

“Nomad Century is the most important book I imagine I'll ever read. Gaia Vince calmly—without drum-banging or hand-wringing—sets forth likely consequences and end-of-century projections for our rapidly changing planet. It'll knock you flat. But before you hit the ground, she hands over an impressively detailed survival plan: supporting radical migration from newly uninhabitable regions, rethinking urban structures and food practices, and restoring climate.” —Mary Roach, author of Fuzz

“The climate crisis already has millions of people on the move, and that number will steadily grow higher till it breaks the political structures of the planet—unless, as Vince suggests, we start now to remake those structures so they can cope, and indeed benefit, from the flow of humans that is now inevitable. An important and provocative start to a crucial conversation.” —Bill McKibben, author of The Flag, the Cross, and the Station Wagon

“This book is a rather astounding addition to a growing body of thought that suggests the twenty-first century is going to include, and even require, lots of human migration—and that handled correctly, this could be part of a good adaptation to the climate and biosphere crisis we are now entering. What Vince gives us here is some cognitive mapping to understand the situation and see a way forward.” — Kim Stanley Robinson, author of The Ministry for the Future

"Once again, Gaia Vince demonstrates that she is one of the finest science writers at work today." —Bill Bryson, author of The Body

“Nomad Century is a landmark work—terrifying in its message and urgency, but ultimately empowering in its conviction about a path forward. Gaia Vince lays bare the scale of the challenge before us, and the grand ideas that will be needed to meet it. We must be ready; this book shows us how.” —Ed Yong, author of An Immense World